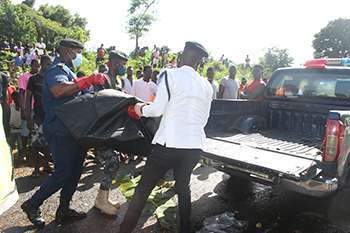 At least 11 individuals including a driver are feared dead in another road crush at Alipe near Yapei in the Central Gonja municipality in the Savannah Tuesday night. The accident happened when a Toyota mini bus with registration number, AS 2872 – 20 had a head-on collision with a DAF Tipper truck with registration, NR 578 – F.

Police sources in the Savannah region confirmed to THE CUSTODIAN that the deceased persons comprise of 9 male adults, 1 female adult and 1 female child.

The Toyota bus had about 18 passengers on board traveling from Tamale in the northern region to Kumasi in the Ashanti region whereas the truck loaded with sand was traveling from Yapei to Tamale.

According to the police, the driver of the mini bus, Akonsi Sumaila, who is now deceased, veered off his lane where he collided head-on with the Tipper truck.

THE CUSTODIAN has gathered that five persons who sustained various degrees of injuries and were initially rushed to the Yapei health center have been transferred to the Tamale Teaching Hospital for further medical treatment.

Meanwhile, remains of the deceased have also been deposited at the hospital for autopsy and preservation.

The accident vehicles have since been conveyed to the Central Gonja Police station to commence investigations.

Food Crisis In The Country Will Get Worse – Peasant Farmers...

Selasi Aklotsoe - April 23, 2022 0
A member of the Peasant Farmers Association of Ghana has predicted that the situation with high food prices and the scarcity of...