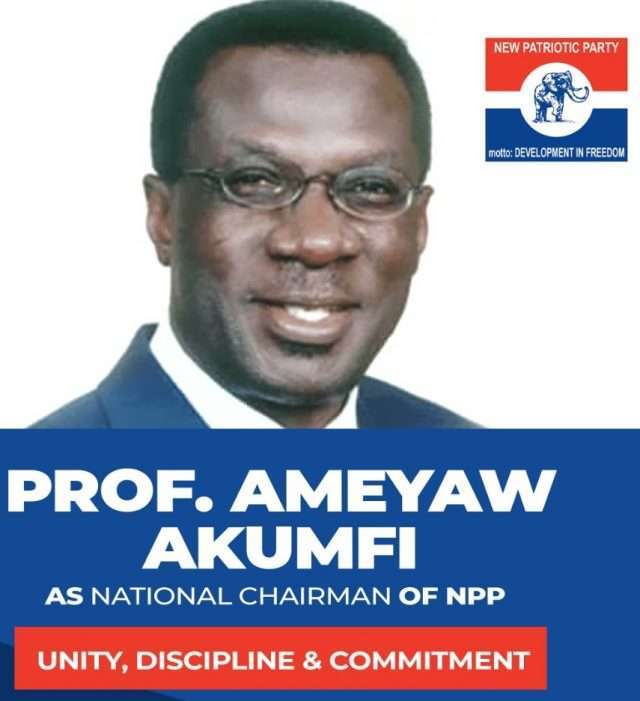 Former Minister for Ports, Harbours and Railways and current Board Chairman of Ghana Infrastructure Investment Fund, Professor Christopher Ameyaw-Akumfi has joined the list of the governing New Patriotic Party (NPP) bigwigs showing interest in the National Chairmanship position when the party opens nominations.

Professor Ameyaw-Akumfi who is also former Minister of Education and former Member of Parliament for Techiman North is bringing on board, unity among the ranks and file of the party, commitment and discipline for a resounding victory of the party in the 2024 elections.

The former minister, from the Bono East region has a track record of dedicated service to the party having held and served the party at various levels including serving as the backbone of the Anti- UniGov Movement on the campus of University of Cape Coast through to PFP and now NPP.

He is widely remembered for the role he played in the creation of the Brong East Region.

Prof. Ameyaw-Akumfi is an educationist.

He was born on January 21, 1945 in Techiman into the Ohene Ameyaw royal family to his father, Nana Akumfi Ameyaw III, then the Omanhene of Techiman Traditional Area and the Chief proponent for the creation of the erstwhile Brong-Ahafo Region in the year 1959.

He had his primary and middle school education at Nkwaeso and Techiman Methodist schools respectively.

He attended the Adisadel College in Cape-Coast in 1959 for his GCE ‘O’ and ‘A’ Levels before entering the University of Ghana in 1965, where he obtained a Bachelor of Science (Zoology & Biochemistry) in 1968, Bachelor of Science (BSc Hons) in 1969 and MSc (Zoology) in 1970.

Professor Ameyaw-Akumfi pursued further education at the University of Michigan in 1972 and obtained a Master of Science (MSc.) in Zoology and PhD in Zoology in 1976.

Prof. Ameyaw-Akumfi is well known in academia with over 30 years involvement in lectureship, evolutionary educational policy and reforms.

He started his career as a young lecturer at the University of Cape Coast in 1970.

Inspired by his penchant for success, he rose through the ranks within a short space of time to become Senior Lecturer, Associate Professor and full professorship in 1991.

He was appointed as the Head of the Zoology Department in 1987 and in the same year, became the coordinator for the Semester and Course Unit System, which was first introduced into university education in Ghana by the University of Cape Coast and integrated into the academic registry of Universities in the country.

Professor Ameyaw-Akumfi was appointed a policy advisor to the Ministry of Education and was a member of the Education Minister’s team to North Carolina State University for the establishment of linkages among universities within the ‘Triangle’.

He was a one-time Director General of Ghana Education Service as well as Minister for Education.

Boris Johnson ‘focused on PPE delivery’ on return to work