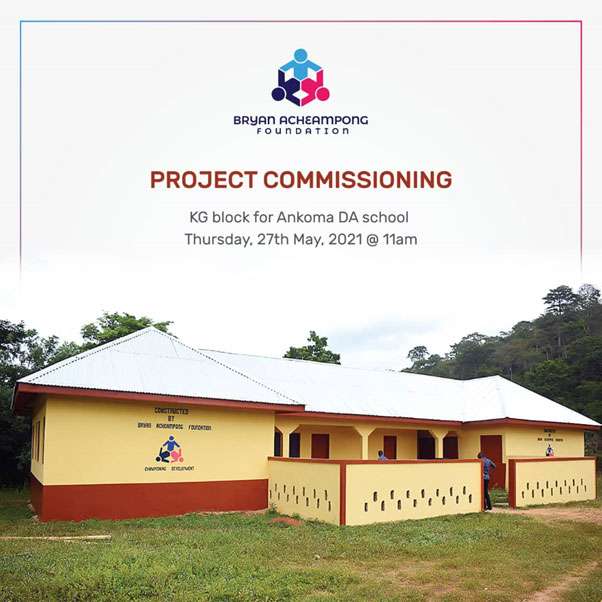 As part of efforts to improve educational infrastructure within Kwahu East district in the Eastern region, the Bryan Acheampong Foundation has completed and handed over a two-unit KG classroom block for the pupils of Akoma D/A school in the Kwahu East district.

The project commenced after authorities of  Ankoma DA School appealed to the BAF to help construct and refurbish a KG block for its pupils.

The request was necessitated by the near collapsed of the makeshift structure which was used as a KG block for the pupils.

Prior to the commencement of the project, there was a stakeholders’ meeting that involved unit committee members, PTA chairman of Ankoma D/A school, head teachers and the traditional authorities to make an input to the best facility for the pupils.

The two-unit KG classroom block comes with additional facilities such as an office, a store room, toilet, urinal and a play area for the school.

Nana Amanenor Kodua II, who chaired the handing over ceremony thanked the Foundation for such an initiative and pledged his support to utilise the school block for the benefit of the children in the community.

The District Chief Executive (DCE) for Kwahu East, Mr. Isaac Agyapong in his remarks observed that although Government has now included Kindergarten level to its mainstream education, there is infrastructural deficit, hence the support from NGOs in the area of infrastructure is highly appreciated.

The District Education Director, Mr. Robert Andah Monney said the era when education was acquired in stressful classes and dilapidated buildings are becoming a thing of the past, stressing the sense of communal responsibility is the idea behind the establishment of private institutions such as the Bryan Acheampong foundation to join efforts with the government in providing quality education.

Mr Frank Amoo, the Director of Development for the Foundation, added that the vision of the Foundation’s Founder to improve education in the district is being translated into some of the various interventions being implemented in the education sector to support the 5 districts in Kwahu Kwahu East, Kwahu West, Kwahu South, Afram Plains North and Afram Plains South.

The project seeks to provide a conducive atmosphere for teaching and learning as both teachers and the school children will be safer and more secured. Enrolment of pupils at the KG level is also expected to increase.