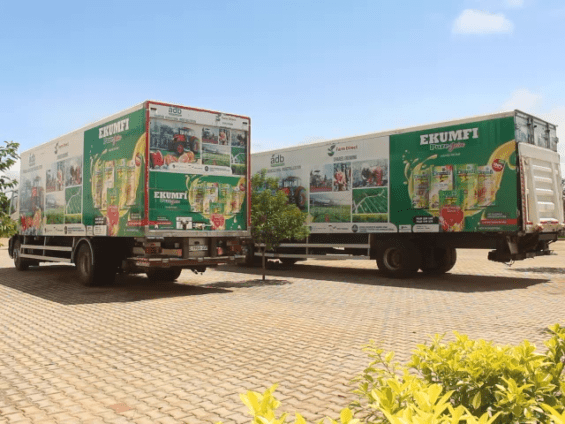 Fruit juice manufacturing company, Ekumfi Fruits and Juices Factory, says it will, in a few months, begin exporting its product, Eku Juice, to markets in the United States and United Kingdom.

The company also says there are competing demands globally for Eku juice, which is made from raw pineapple, ginger, melon, and other fruits without the addition of concentrates.

Speaking after a tour of the Member of Parliament (MP) for Ekumfi, Abeku Crentsil, the Operations Manager of the Factory, Frederick Kobynna Acquaah, indicated they were excited by the growing interest, not only in Ghana but globally.

He stated that the company would work extremely hard to satisfy the Ghanaian market and meet the expectations of the global market.

“Some of our pallets are leaving for the United States tonight, but not just the pallet, it is going for a certain test because Ekumfi fruits and juices limited, in the next few months, will be exporting to the United States of America markets and there are other interests from the European market and then the UK as well. There are some in China that we are working on; that we haven’t finalized on, but the earlier ones that I mentioned, we are on course”.

“We are planting every day.” We are harvesting every day, so I’m not able to give specific figures, but the truth is that we have a target of 12,000. Initially, we had a target of 3000; by two years, we had a target of 5000. We put all those targets aside. We are pushing all of them out and we are working at 12,000. I really can’t tell where we are, but I know we are in a very good mark as we speak”, he stated.

He further indicated that they were also excited about the current operational picture of the factory.

“These are the only products that have yet to go through their period of quarantine and then leave here. Whenever we produce, they’re already gone”.

Mr. Acquaah also says they are amazed at how the product has been accepted by the people of Ghana and even outside the country.

“I don’t remember seeing any adverts for Eku juice, but whenever we produce it’s gone. It tells you how well we have been received by the population. We promise to continue giving them the best. What we do here is just squeezing our juice from pineapple, squeezing some from orange, squeezing some from the ginger and these are the products, and box them as you see here. So, we are committed to giving our best and we have been well received”.

The Member of Parliament for Ekumfi, Abeku Crentsil, gave the management of the factory thumbs up for the work they have done.