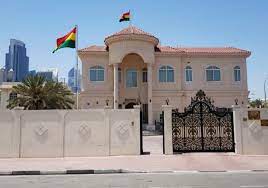 Five Ghanaians are in the grips of Dubai authorities for allegedly transporting parcels of Marijuana (Weed) into the United Arab Emirates (UAE). The Consulate of Ghana in the UAE confirmed the arrest of the five suspects in a communiqué.

According to the Ghanaian authorities, the suspects were picked up at the Dubai International Airport between the month of January and March 2021 for trying to traffic the substance into the Western Asian country.

THE CUSTODIAN has learnt that one of the suspects has already been sentenced to 10 years imprisonment.

The Consulate bemoan that, “The sad part of it is that, all the parcels containing the weed were given to them by the agents in Ghana who acquired the UAE visa for them with instructions to them to give the parcels to their counterpart agents in the UAE on arrival. It is also interesting to know that the weed is normally hidden in food items.

It may also interest you to know that currently all the five people are in police intention. One of them has since been sentenced to 10 years imprisonment, probably for carrying weed he was not aware of and weed that someone else would have benefited from” the statement added.

In this regard, the Consulate has cautioned Ghanaian passengers and their families to avoid taking parcels and other materials from agents or other persons to deliver in the UAE expect if they can inspect and ascertain the true content of the items.

Admin - October 24, 2021 0
Contrary to the usual tradition of giving cash donations at funeral grounds among many Ghanaian ethnic groups, mourners were directed to pay their donations...
General News

Admin - April 21, 2021 0
Ghana topped the 2020 West African Senior School Certificate Examination (WASSCE) with the highest number of grade A results. A total of 411 out of...
General News

Admin - March 24, 2020 0
Speaker of Parliament, Professor Aaron Michael Oquaye has expressed disappointment that an internal memo from the Minority leader intended for his office has...
General News

Admin - June 18, 2021 0
The National Communications Authority (NCA) yesterday won a case, which was filed against it by the Media Foundation for West Africa (MFWA). MWFA dragged NCA...
General News

Admin - August 25, 2021 0
The Coordinator of Zongo and Inner-Cities Development Secretariat (ZICDS) under the Office of the President, Mr Ben Abdallah Banda has stated that education is...
General News