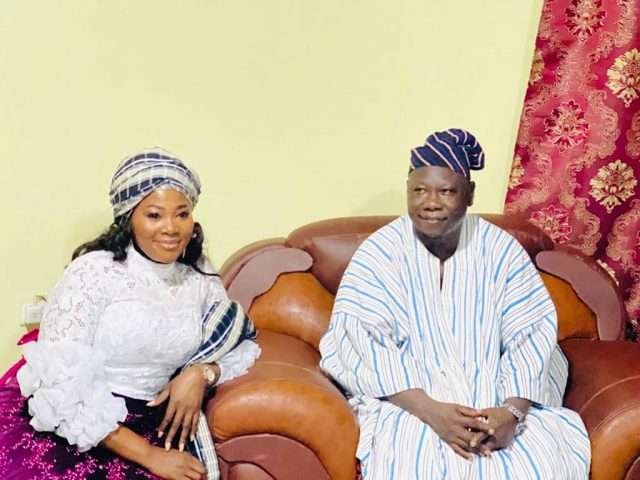 Hajia Fathia Abdul-Aziz, a staffer at the office of the President on Sunday, October 24, 2021, joined the paramount Chief of Savelugu, Yoo Naa Abdulai Yakubu Andani V to celebrate this year’s Damba festival.

The weeklong celebration will be climaxed today Monday (25th October, 2021) across the Northern Region following the successful Naa Damba (Chiefs’ celebration) on Sunday.

The Yoo Naa among many other chiefs in the Dagbon traditional kingdom observed the Damba festival with series of cultural activities at their various traditional jurisdictions.

Ms Fathia presented a cow, 10 bags of rice and an undisclosed amount of cash to the traditional ruler to support the celebration of the festival.

She seized the occasion to display her cultural dance skills amidst drumming with her beautiful smock fabric at the Yoo Naa palace in Savelugu.

The Damba festival is celebrated on the third month of the Dagomba calendar by the chiefs and people of the Northern, Savannah, North East, Upper West and Upper East regions.

Hajia Fathia in an exclusive interview told THE CUSTODIAN that she was excited to participate in the colorful event and thanked the Yoo Naa for always opening his doors for her anytime she calls on him.

She underscored the importance of this historic and rich culture, adding it is a significant moment for every illustrious son and daughter of the land, home and abroad to celebrate.

She further asserted that the period enjoins Dagombas to strengthen the existing peace and unity amongst them.

According to the presidential staffer, the Damba festival among other festivities in the north promotes local tourism and encouraged Ghanaians to always travel to the north to witness the beautiful festivals.

We will die in the chamber of parliament to fight against E-Levy – Sam...

What Stephen Appiah Said To Asamoah Gyan After 2010 World Cup...

Selasi Aklotsoe - April 15, 2022 0
Asamoah Gyan has opened up on his conversation with Stephen Appiah after missing a last-minute penalty against the La Celeste(The Blue Sky)...
Events

Selasi Aklotsoe - April 1, 2022 0
The Black Stars of Ghana who went pass the Super Eagles of Nigeria in the World Cup play-offs last month have been...
Events

Selasi Aklotsoe - April 23, 2022 0
Tyson Fury retained his WBC world heavyweight title by stopping Dillian Whyte near the end of the sixth round on Saturday...