Home News I Am Not Going To Accept Defeat In Fight Against Galamsey –...
Share
WhatsApp
Facebook
Print
Email
Copy URL 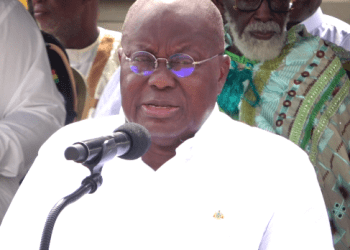 President Nana Addo Dankwa Akufo-Addo has reiterated his government’s commitment towards the fight against illegal mining, popularly known as galamsey.

The menace has contributed to massive destruction of lands and water bodies in most mining areas across the country, with constant demand by the public for the government to act on the situation.

Speaking during his tour of the Eastern Region, President Akufo-Addo highlighted some interventions rolled out in combating galamsey.

”Many measures are being put in place. Community mining exercises are going on, and it is very important that we show determination. We will not relax. I am very determined. I am not going to accept defeat in this fight. I am determined to win the fight against galamsey.”

This, he says, will help Ghanaians repose confidence in the party and vote for them in the next election, thereby making the NPP’s quest to break the eight a reality.

“Let us work together to get rid of this menace. I believe that if the people of Ghana see a determined effort on our part, which yields results, our water bodies are clearing, our lands are being reclaimed, and our forest zones are being preserved, it will help them enable us break the eight”, he stressed