Home News General News I Will Reveal How Lordina Mahama Said She And Her Husband Will...
Share
WhatsApp
Facebook
Print
Email
Copy URL 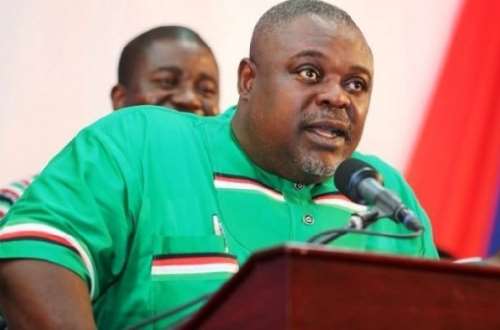 Founder of the Atta-Mills Institute, Samuel Koku Anyidoho, has threatened to reveal details of threats made to him by the former first lady, Mrs. Lordina Mahama.

The former Deputy General Secretary of the National Democratic Congress (NDC) disclosed this in a tweet on Sunday, March 20.
He said, “I will tell the story of how Lordina Mahama called me to threaten me that she and her husband will deal with me”.

The tweet by the expunged NDC member, adds to a series of scathing comments, which he has been making against the former President, John Dramani Mahama, and other leading members of the NDC over the last 24 hours.

In one of such tweets, he further wrote, “I have experienced death very closely and so I don’t fear death. I am not a litigant and shall not be one! But, if outright urchins stand in the name of John Mahama, to accuse me of killing my own 8yr old daughter, and President Atta-Mills; I shall CLEAR my name. Why is JM quiet?”.

In another tweet on Sunday, Koku Anyidoho said, “Can Omane-Boamah and Okudjeto Ablakwa say they did not call me less than 48hrs after the death of President Atta-Mills, only for Omane-Boamah to tell me to leave the Presidency because the new President, John Dramani Mahama, said he can’t work with me for obvious reasons ?”

The tweets from the former presidential staffer, as monitored by JoyNews relate to his reservations about the death of former President Atta-Mills, and how he says some members of the NDC have repeatedly accused him of killing his former boss.

According to him, associates of John Mahama, are deliberately dragging his name in the mud, and therefore he will speak up to defend himself.
Mr. Anyidoho also took a swipe at the brother of the late Professor Mills, Samuel Atta-Mills, whom he said, should ‘NEVER dare him to talk”.

“I have consistently said that if, Sammy Atta-Mills, (MP for KEEA), makes a big mistake and crosses my path; that would be his own business”, one of his tweets said.

However, none of the persons Koku Anyidoho has mentioned in his recent tweets have responded to his allegations.

Meanwhile, reacting to his comments, scores of twitter users have expressed their displeasure with Koku Anyidoho. According to them, his approach in dealing with his grievances are not appropriate and therefore he must find better ways of airing his concerns.

Mr. Koku Anyidoho was earlier suspended from the NDC on February 8, 2021, after a petition by some members of the NDC. Johnson Asiedu Nketia, the General Secretary of the party in a letter stated that, at a meeting on January 20, 2021, the Functional Executive Committee (FEC) considered two separate petitions from two members.
He explained that two petitioners lodged an official complaint against his former deputy “which is viewed in breach of the party’s disciplinary code for its members as contained in the NDC constitution”.

According to the NDC’s chief scribe, after the party deliberated on the petition, they took a decision to suspend Koku Anyidoho in accordance with Articles 46(1), 46(6) and 46(8)(b) of the party’s constitution.
Later, he was officially dismissed from the NDC on July 27, 2021.

In a letter addressed to Mr Anyidoho, the party stated that the decision comes after the Functional Executive Committee (FEC) considered the report and recommendations of the National Disciplinary Committee on the case of misconduct and anti-party behaviour brought against him.

“The Committee’s report found you guilty of the said allegations of misconduct and anti-party behaviour and recommended your outright expulsion from the Party. You are, therefore, by the decision of FEC expelled from the National Democratic Congress and for that matter, you are no more recognized as a member of the Party and cannot carry yourself as such,” parts of the statement by the General Secretary, Asiedu Nketia, read.

Admin - September 9, 2020 0
The Minister for Business Development, Dr Ibrahim Mohammed Awal has presented a brand new Hyundai Ambulance to the Regent of Jisonayili, suburb of the...
General News

Admin - July 12, 2021 0
The age-long perennial water crisis in the Gonja traditional area in the Savannah region is becoming a thing of the past as President Nana...
General News

Admin - December 3, 2020 0
A senior lecturer with the University for Development Studies (UDS), Dr. Ibrahim Mohammed Gunu has been overwhelmingly elected Dean of the Faculty of Education. He...
General News

Admin - March 4, 2021 0
The Supreme Court has dismissed the election petition brought before it by John Dramani Mahama, the 2020 Presidential Candidate of the opposition National Democratic...
General News

Admin - August 27, 2021 0
Companies engaged in the mining sector in the northern part of the country have been told to do the right things to ensure that...