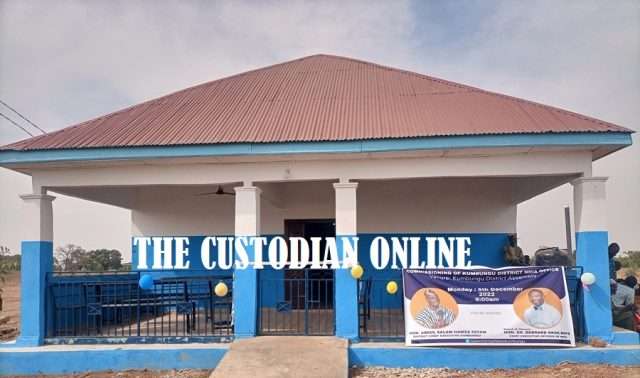 The Chief Executive Officer of the National Health Insurance Authority, Dr Bernard Okoe Boye together with the District Chief Executive of Kumbungu in the company of Chiefs of the area on Monday, December 5, commissioned the NHIS District Office.

In the interim, three NHIS Staff have been assigned to the newly constructed and furnished facility to man affairs of the office whilst efforts are made to recruit other workers to the place.

The DCE for Kumbungu, Hon Abdul Salam Hamza Fatawu, in his remarks said the district is considered per-urban due to its proximity to Tamale but lamented people could not access quality healthcare as a result of the absence of the NHIS office.

He stated the population of the district according to the 2021 population and housing census stands at 110,586 and reiterated the absence of the NHIA office affected the acquisition of NHIS cards by the citizens to enable them access healthcare.

With the establishment of the office now, Mr. Hamza Fatawu noted the people will not travel several kilometers to their sister districts such as Tamale, Tolon and Savelugu municipality to be enrolled on to the scheme.

“Cost of traveling to Tamale or Tolon is sometimes more than the premium charge, time and energy among others are all serious challenges been confronted by our people” he added.

The DCE said the construction of the district NHIS office complex since he assumed office in 2017 was one of his major priority projects and highly commended the Chief Executive Officer of the NHIA, Dr Bernard Okoe Boye under whose tenure of office this dream has been realized.

He further gave his full assurance that the Kumbungu District Assembly stands ready to work with the staff of the NHIS in diverse ways possible to achieve its objectives.

The DCE did not also mince words to demonstrate his appreciation to the Minister for Tourism, Arts and Culture, Dr Ibrahim Mohammed Awal for the significant role he played to get the project completed.

The NHIA Chief Executive Officer, Dr Okoe Boye, for his part said the people can now access the full services of the National Health Insurance Scheme with much stressed. He commended the DCE and all stakeholders in the district for working hard to get the office complex facility done.

He announced that as a result of the digitization agenda beneficiaries will no longer be required to visit the district offices to renew their cards or register to be enrolled to the scheme or maybe would only visit the offices to do some enquiries.

Dr Okoe Boye said the “MyNHISApp” launched on Monday, December 5, by the Vice President, Dr Mahamudu Bawumia will now enable the people to register onto the health insurance policy.

Meanwhile, the new NHIS mobile app will operate on both Android and iOS smartphones and will allow NHIS members to securely pay registration and membership renewal fees from their mobile money wallets, Bank and Visa cards.

The application has a member authentication feature embedded in it to enable healthcare providers validate the membership status of members of the scheme before providing healthcare to them.

This feature of the application is aimed to reduce spurious claims, ranging from impersonation and claims manufacturing resulting from collusion between NHIS clients and healthcare providers.