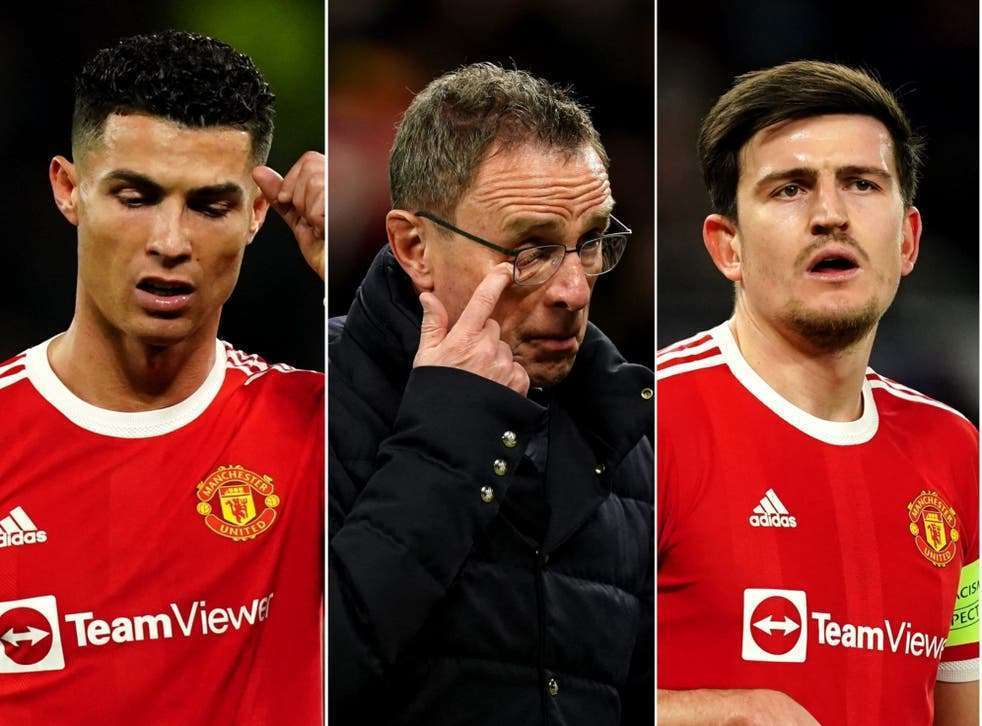 After suffering another blow to their hopes of making next season’s Champions League with a disappointing – in result and performance – Old Trafford encounter with Leicester, talk outside the club will be of a season unravelling.

Having dispensed with Ole Gunnar Solskjaer in November, Ralf Rangnick’s arrival has not really improved the situation. The German’s nine from 21 win record (42.85%), is marginally better than the Norwegian’s seven from 17 (41.18%).

But it is not good enough. United now need 14 points from their final eight games to better the 64 during the sorry 2013-14 campaign under David Moyes which is their worst return in three decades.

Inevitably, thoughts will again turn to who will take charge in the summer to try and rectify the damage of a terrible season.

Manchester United are eager to assure supporters their managerial search is extensive and not just limited to two candidates, Erik ten Hag and Mauricio Pochettino.

But there is no dispute from some within Old Trafford when it is questioned who else, realistically, could be in the frame.

Luis Enrique is committed to coaching Spain at the World Cup, which rules him out until the end of the December and probably longer given the intensity of tournament football. Now the situation at Chelsea has stabilised to an extent and the search for a new owner looks like finding someone committed to keeping the Blues at the top, the idea of luring Thomas Tuchel away from Stamford Bridge is receding.

United admire both men but sources admit recruiting them would be “difficult”.

Sevilla’s Julen Lopetegui would be an unlikely choice and Brendan Rodgers a tough sell to United fans given the combination of his Liverpool past and an underwhelming season at Leicester.

Which brings it back to Ten Hag and Pochettino, both of whom would come to Old Trafford with question marks hanging over them.

Paris St-Germain chairman Nasser Al-Khelaifi and Ajax chief executive Edwin van der Sar are both on the European Clubs’ Association board. The ECA met in Vienna this week. Manchester United’s managerial search was mentioned when the pair spoke informally – but neither know which way the Premier League club will go.

Evidently, managing United is a challenge at present – but, BBC Sport was told, that is the attraction for someone keen to prove their abilities at the very highest level.

Pochettino’s Old Trafford admirers date back to his time at Tottenham.

Yet the doubts about the Argentine – namely he doesn’t win when it matters – remain. After all, he failed to win the title at PSG last season and the French club’s elimination at the Champions League last-16 stage this term is viewed as not being good enough at the club given the huge investment in the squad.

That observation probably means Pochettino will be relieved of his duties at the end of the season and football director Leonardo is also on shaky ground as PSG prepare for a major overhaul.

Ten Hag’s status mainly comes from Ajax’s run to the semi-final of the Champions League in 2019 when, ironically, he was denied a place in the final by Pochettino’s Spurs.

The 52-year-old is viewed as a progressing coach.

But the demands of an English season, the relentless combination of an exhausting fixture list, where difficult games pile up week after week, are an alien concept

The two Ajax managers before Ten Hag were Peter Bosz and Frank de Boer. Upon leaving Amsterdam, they didn’t even make it to the end of the year in their first seasons at Borussia Dortmund and Inter Milan respectively, let alone the end of their debut seasons.

‘Not the favourites for number four’

With Wolves and West Ham snapping at their heels and Crystal Palace still in the FA Cup, it is not completely out of the question a place in the dreaded Europa Conference League play-off round in August awaits.

“I am not a fortune teller,” said Rangnick. “I don’t know where Manchester United will be next season.

“It is my job to finish this season on the highest possible note. Saying that does not mean necessarily to finish fourth. Today’s result has not made the situation better obviously.

“It doesn’t help at all to look at the table every weekend and speculate what might happen. Right now, we are for sure not the favourites for number four.”

MMA: UFC Releases Francis Ngannou And Strips Him Off Title

An Open Letter To Alan Kyerematen