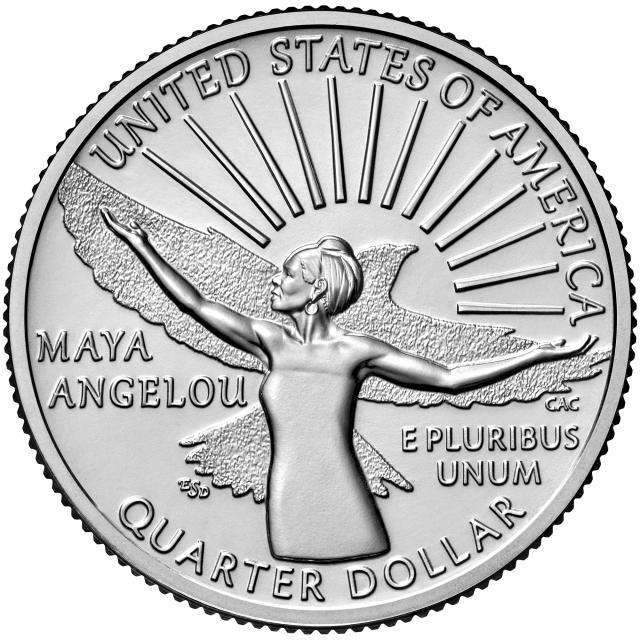 The US Treasury has minted coins featuring poet Maya Angelou – the first black woman ever featured on the US 25-cent coin known as a quarter.

Angelou, a poet and activist, was the first black woman to write and perform a poem at a presidential inauguration.

Coins are planned for other pioneering women, including an astronaut, a tribal chief and an actress – as part of the American Women Quarters programme.

The move was hailed by the nation’s first female treasury secretary.

“Each time we redesign our currency, we have the chance to say something about our country – what we value, and how we’ve progressed as a society,” Janet Yellen said in a statement on Monday.

Angelou – an author and social activist – died in 2014 at the age of 86.Media caption,Maya Angelou and her mother Vivian Baxter

She shot to fame with her ground-breaking autobiography in 1969, I Know Why the Caged Bird Sings, about her childhood in the Deep South.

She received dozens of honorary degrees and wrote over 30 bestselling works. In 2010, she was given a Presidential Medal of Freedom – the highest US civilian award – by President Barack Obama.

The new quarter depicts Angelou with open and outstretched arms. Behind her is a flying bird and rising sun, which are “inspired by her poetry and symbolic of the way she lived”, the US treasury department said.

The front side of the quarter shows the traditional bust of George Washington, the country’s first president.

The US Mint plans to issue 20 more quarters over the next four years, depicting other American women who played important roles in the country’s history.

Coins are also planned this year for Sally Ride, the first female US astronaut; Wilma Mankiller, the first female chief of the Cherokee Nation and a campaigner for indigenous rights; and Anna May Wong, who is considered the first Chinese-American film star in Hollywood.

Plans to replace President Andrew Jackson on the $20 bill with black abolitionist Harriet Tubman – who rescued enslaved people through the Underground Railroad – are still in the works.

Historical women have rarely featured on US currency.

In the 19th Century, the first US First Lady, Martha Washington, was on the $1 silver certificate and Native American heroine Pocahontas was in a group picture on the $20 bill.

On coins, Sacagawea, a Native American explorer, appears on the gold dollar. Suffragist Susan B Anthony and deaf-blind activist Helen Keller appeared on the silver dollar and Alabama quarter respectively.

We Must Revisit The Comprehensive Sexuality Education In Ghana

Selasi Aklotsoe - May 19, 2022 0
Last year my Aunty travelled to Togo for about 2 months. She tasked me to take care of the home and keep...
Music

Angolan polygamist who fathered 156 children with 42 wives laid to...