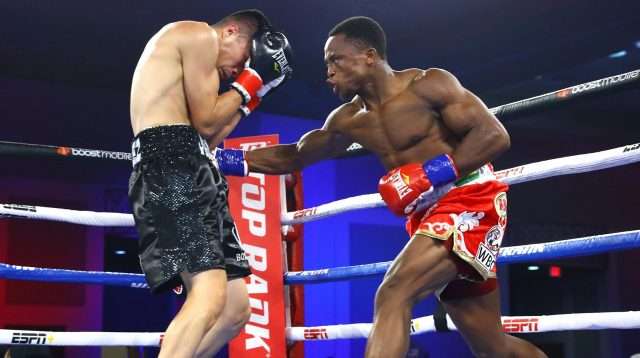 The Ghanaian fended off a relentless Joet Gonzalez, winning via a split decision on Saturday night to earn a featherweight title shot.

The win puts the 27-year-old in a position to fight Emanuel Navarrete a third time.

Gonzalez, ranked number one among the WBO’s contenders for Navarette’s would now make way for the Ghanaian who becomes Navarrete’s mandatory challenger after defeating Gonzalez (25-3, 15 KOs).

“I said to the people that my journey can be a Hollywood blockbuster movie, and I praise God always,” he said after the fight.

Navarrete defeated Dogboe back-to-back in December 2018 and May 2019. The Mexican won the first via unanimous decision, before dropping him twice and stopping him in the 12th round in a rematch five months later.

The Ghanaian has since won four straight fights since Navarrete beat him in their rematch, and he’s open to a new challenge.

“Whoever the champions are, they should watch out. The ‘Royal Storm,’ I am back, baby!” he called out.

Dogboe’s fight against Gonzalez was a WBC elimination bout, which also puts him in contention to fight WBC’s mandatory challenger for its newly crowned featherweight champion, Rey Vargas (36-0, 22 KOs).

The ‘Royal Storm’ reckons with his trainer in his corner, he has no issues.

“I have always seen [trainer] Barry [Hunter] as a very inspirational person, a father figure.

“He’s a person that when it seems like it’s all gone, he always has something to say to you. I really needed him in my corner.

“He was able to pull that extra strength in me out,” he said.

We will die in the chamber of parliament to fight against E-Levy – Sam...