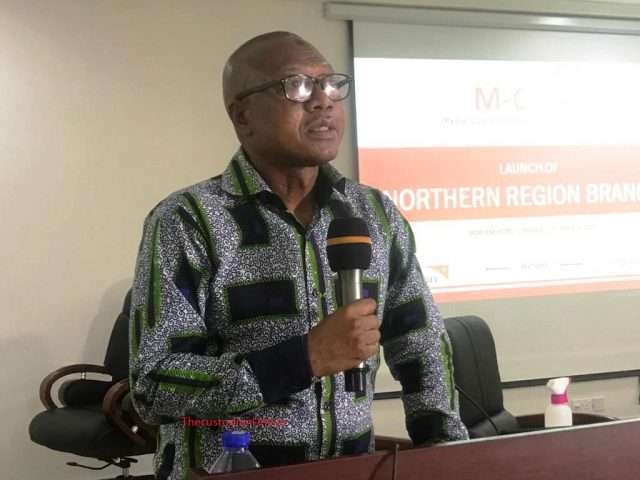 The Northern Regional Coordinating Director, Alhaji Alhassan Issahaku has called on the media to diversify new approach and strategies to deal with issues of open defecation in the country.

He believes we are likely not to win the fight against open defecation if we continue to do things the normal way.

Speaking at the inauguration of the Northern Region branch of the Media Coalition against Open Defecation (M-CODe) in Tamale, Wednesday (17 March, 2021), Alhaji Issahaku entreated journalists to demonstrate the power of the media by holding leadership accountable on the sanitation situation in the country.

Available data shows that about 6million Ghanaians defecate outside without using any approved toilet facility on daily basis in Ghana. Goal 6 of the Sustainable Development Goals is engineered to promote Clean Water and Sanitation in all United Nations member states by 2030.

In this regard, the Chief Director believes sanitation is the basis for development in every country and therefore, if we lose out on sanitation, then, we don’t have the chance as a society and nation to develop.

“If politicians are not doing what they are supposed to do, I think that the media knows it all that their first responsibility is to hold leadership to account. And in doing so, we must diverse all strategies, whether we have to go to the assembly meetings to hold them to account, whether we hold them to account in our various media houses or through our writings and so on, we must find a way to make it effective and I can bet that if we can hold every leader to account for what he/she is supposed to do, we can achieve the results” he stated.

Alhaji Alhassan Issahaku implored members of M-CODe to fully appreciate the reason for such which the coalition is setup, reiterating the need for Journalists to pursue innovative ways and do things differently to eliminate open defecation in the region.

“We have seen you highlight on issues and force politicians to react even when they’re sometimes not prepared. We’ve seen you go to schools, capture students lying on the floor and the next day furniture floods in the school and we’ve also seen you push politicians put up sanitary facilities when they are not available just through the power of your pen and how cover of all these things”

The Media Coalition against Open Defecation is a media advocacy platform supported by the World Vision International (WVI) and Kings Hall Media, with the ultimate objective of building the capacity of Journalists to advocate against the poor sanitation conditions in the country.

Ghana Alhassan is engaged in theatrics to court sympathy votes –...

Admin - April 19, 2022 0
Ghanaians have been urged to pray against social atrocities and learn to forgive one another and live together in peace and harmony....
General News

Admin - March 30, 2022 0
Electricity supply has been restored at Koblimahagu, suburb of the Tamale Metropolis following the intervention of the King of Dagbon, Ya Naa...