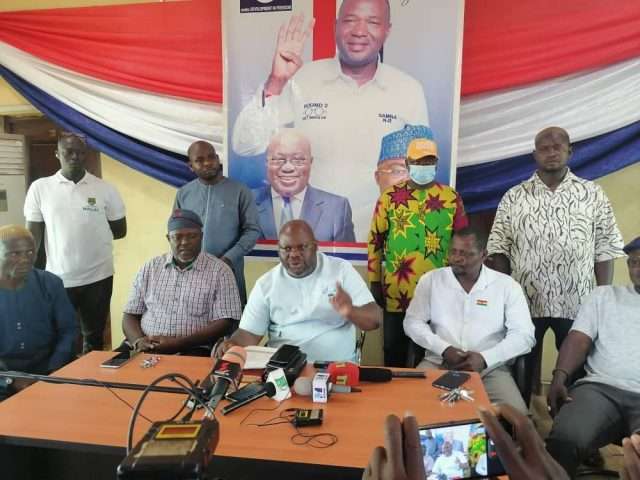 The eighteen constituency chairmen of the New Patriotic Party in the northern region have stage a strong defense for the embattled Regional Chairman of the party, Mohammed Baantima Samba following recent allegations that the latter always claims glory of Vice President Dr Mahamudu Bawumia social support to Chiefs among other stakeholders in the region.

According to the Concern Youth Groups of NPP Tamale at a news conference earlier this week, there have been a deliberate misrepresentation and disinformation by the chairman Samba led regional executives committee and their cohorts in relation to donations made by H. E. Alhaji Dr. Mahamadu Bawumia.

“We felt this attitude or behavior of chairman Samba and his apparatchiks is a mark of disrespect towards the Vice President and beneficiaries of his donations and it must be stop.

Anytime the Vice President out of his benevolent gesture made donations for performance of occasions such as funerals and celebrations of festive seasons the unrepentant chairman Samba and his cohorts take credit for it” the group said in their statement.

In a sharp response to these allegations however, the constituency leaders of the party described the allegations as baseless and outright falsehood.

“It has come to our notice that some youth groups of our party are on social media making some allegations which are not true. We are here to let everyone know the truth. During the Ramadan season, His Excellency the Vice President gave us 25bags of sugar, the Regional Chairman gave us 20bags of sugar, and the second Vice Chairman, Alhaji Sunday gave us 18bags of sugar for each constituency”

“Before we celebrated Sallah, the regional chairman from his own pocket donated 50bags of rice to each constituency and all Chairmen received them to their various Constituencies” spokesperson of the caucus who doubles as Chairman for Yendi, Mr. Abubakari Sadiq explained during a confab in Tamale.

He said the NPP youth must always seek clarifications on matters of importance to them and avoid speculating such malicious allegations and questioning the integrity of their leaders.

Chairman Nam as he is affectionately called by NPP faithful further advised the youth to redirect their energies to communicate the good policies and programs being implemented by the Akufo-Addo led NPP administration in order for the party to achieve its agenda of breaking the eight in 2024.

We persuaded Mills for four hours not to resign as President – Prof. Ahwoi...