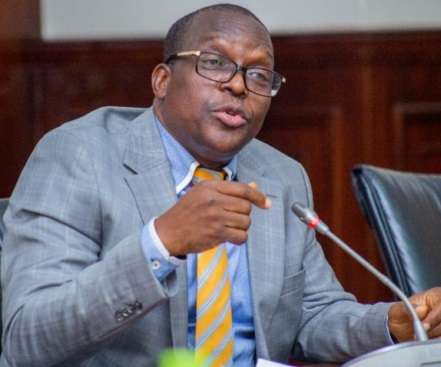 Speaker of Parliament Alban Sumana Kingsford Bagbin has given assurance that the Legislature will not work to frustrate the business of the Executive of government.

According to him, this “good working relationship” has translated into the successes that they have achieved in resolving delicate and thorny issues that have confronted the nation.

“While efforts are made to strengthen the independence of Parliament to give Ghanaians the true sense of the democracy that they voted for, Parliament will not work to frustrate the business of the Executive.

“As a fact, immediately after my election as Speaker of Parliament, through the initiative of the President, I have built a healthy and fruitful working relation with H. E. Nana Addo Dankwa Akufo-Addo, the President of the Republic of Ghana. I have also reached out to the Chief Justice and I am happy with the harmonious working relations between the Legislature and the Judiciary.

“The synergy this has generated in the working relations of national leadership, translates into the successes that we have achieved in resolving very delicate and thorny issues that from time to time confront our dear nation”, he added.

Speaker Bagbin stated these in his acceptance speech after he was conferred with the coveted Millennium Excellence Award for MP of the Decade at a Special sitting of Parliament on Monday.

The award was in recognition of his immense contribution to national development as Ghana’s longest-serving lawmaker for over two decades.

He was decorated with a sash and presented with a plaque in the shape of the Ghana map and a citation.

Speaker Bagbin said development will be quickened when the various arms of government work together in harmony but independent of each other.

“Hon Members, indeed, evidence abounds throughout the developed world that the majority of them made tremendous strides in their development trajectories through the collaborative, yet principled role played by the respective arms of government. Parliament of Ghana, under my leadership, will strive to make this principle a governance culture in Ghana,” Mr Bagbin stated.

The Speaker stated that under his leadership, he will also create space to bring the views of the generality of Ghanaians to bear on the governance of the country to ensure that decisions that affect the people of Ghana are borne out of processes that take into account the very needs of the people.

According to him, Ministers of State will have to appear before Parliament at all times to account for their stewardship.

He also pledged the commitment of the House to work to ensure there is value for every decision taken by government.

“We will equally work to ensure that there is value for every decision made and for every expenditure incurred in furtherance of the development agenda of our dear country. The era when Ministers of State and other government officials ignored the call of Parliament to account for their stewardship is gone and I believe, will remain as a thing of the past,” he reiterated.

Mr Bagbin observed that the ability to widen the democratic space of the country and forge ahead as a united people with a common destiny would depend on how accommodating members are of the views of one another in the interest of Ghanaians.

Ghanaians, Mr Bagbin noted, voted in the December 2020 elections against extreme partisanship characterized by acrimony and rancour in debates on the floor of the House.

“Indeed, it is very obvious that the people of Ghana require both sides of the House to work closely with each other to help build the country.

“This is the concept on which the Parliament of Ghana was crafted. A unique Parliament, made in Ghana and though similar, it is different from all Parliaments in the world,” he said.

According to him, this is found in the engraved meanings of the traditional symbols on the Mace of the House, the authority of Parliament and the horseshoe arrangement of seating in the House.

This uniqueness, the Speaker said, “demands unity and wisdom to build consensus more often without suppressing dissenting views or the views of the minority and the marginalized in our society”.

Mr Bagbin expressed pride that so far both sides of the House have performed creditably well, which has spared him the ordeal of often overseeing a rancorous House, as witnessed in some Legislatures.

“The House, by this, has succeeded in sending a message of unity and an unflinching resolve to optimally explore available avenues in order to secure greater dividends for our democracy.

“To this end, I would like to extend my sincere appreciation to the Leadership and Members of the House and hope that this cordiality will be maintained to deepen our parliamentary democracy,” he pleaded.

Admin - March 23, 2020 0
The Ghana Association of Medical Laboratory Scientists (GAMLS) has issued a warning to healthcare givers and the public to be wary of...