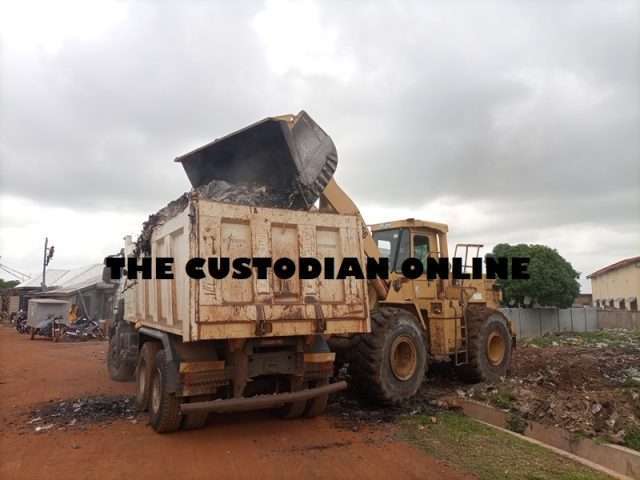 The Tamale Metropolitan Assembly (TaMA) has moved to evacuate some age-longed abandoned heap of refuse dumps in four communities in the city.

The assembly began the two-day clean up exercise on Wednesday (July 13, 2022) with the evacuation of garbage at Choggu West, Tamale West Hospital area and Dabokpa community.

According to Mr. Amadu Mustapha, the Public Relations Officer of the Metro Assembly, the fourth community, Nalong, would be evacuated on Thursday.

“We are sure that, for the two days, we would be evacuating critical dumping sites – critical as in the quantum of the waste that has been dumped there for only God knows how long. What we’re witnessing here has been nuisance to the community amidst public outcry” he said.

Some residents who spoken to THE CUSTODIAN during the exercise commended the city authorities for the intervention.

One of the residents at Dabokpa, Musah Abdul Malik, who operates a bakery house complained bitterly about the attitude of some community members who dump indiscriminately.

According to him, there used to be a pay as you dump arrangement in the community until some recalcitrant inhabitants starting fighting the person managing the refuse container.

“The reason for the heap of garbage here is that, we used to pay and dump, but some people started unnecessary quarrels with the one watching over it then he also left it. People then started dumping haphazardly to the point our assemblyman had to complain about the situation but no one heeded to that.

“Anytime there is wind blow, it carries the rubbish into our home and contaminates our water storage and our bread flour as well; my boss constructed a wall around the place but yet it is not safe” he explained.

THE CUSTODIAN has leant the indiscriminate dumping of refuse in the area has persisted for ten years.

Reacting to this, Mr. Mustapha said the assembly will continue to engage community members and the relevant stakeholders to adopt self-help initiative including the pay-as-you-dump policy.

“Like we said previously, what we are doing is not sustainable, it’s just a stop gap measure but beyond that we have triggered a conversation with the key stakeholders in the respective communities to see how they can collaborate with the assembly to address the menace – it’s a serious menace and be sure that if nothing is done differently then this waste will find its way to the site”.