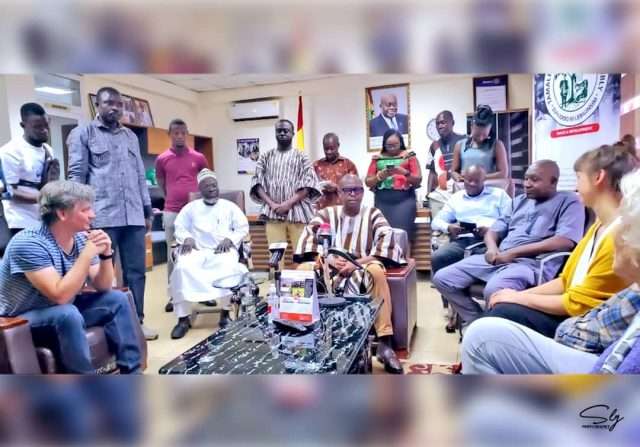 The Mayor of Tamale, Hon Sule Salifu, together with Chiefs in the northern regional capital on Tuesday (September 20, 2022) received a high-powered delegation from City of Münster in Germany to deepen ties and accelerate development in the two cities through arts and culture.

Authorities of the North West German City in May 2022 hosted a delegation from the Tamale Metropolitan Assembly to discuss and share interesting ideas, connections, create friendship and encounters between the two sister cities.

The Deputy Mayor of the City of Münster, Madam Angela Stahler, in a speech read on her behalf said the partnership is to enable the two cities share knowledge and have the chance to learn from each other.

“Administrations can learn from each other but citizens can and should learn also learn from each other, mostly based on common ground like for example art as we see in the current theater project with Cautus Junges Theater e.V and with the ‘Glokal Mural project’ with the artist Daniel Kwaku Anetang from Tamale in Münster”.

She noted, “Since the first official exchange of letters in 2019 between our municipalities, even more connections have risen up and existing relations could have been deepened. I am completely overwhelmed by the variety of interesting ideas, connections, encounters and friendships between our cities that have newly grown out of this so far.”

She emphasized, “A research about already existing relations between Münster to those regions has leaded us to Tamale. The long-term partnership of our dioceses, existing cooperation between our universities, the engagement of Cactus Junges Theater e.V. and the chamber of handicrafts Münster in Ghana, a school partnership from Münster to Ghana, the long established partnership between the state of North Rhine Westphalia with Ghana, just to name a few already existing connections between our cities.”

She emphasized among others, one of our goals is the initiation of projects with a municipality of the African, Asian or South American continent.

Meanwhile, the Mayor of Tamale, Sule Salifu, for his part commended the German counterparts to explore the arts and culture sector to realize the needed development in their respective jurisdictions.

The Tamale Chief Executive said the partnership also seeks to address access to portable drinking in the northern regional capital, intimating, “I am happy to report that we have started seeing the fruits; one of which is why you’re here. We indicated that we wanted to get portable drinking water for our people around Wamale and I am very convinced that is why your engineer is here”.

Alhassan Andani, Ras Mubarak and others contest Council of State election in N/R