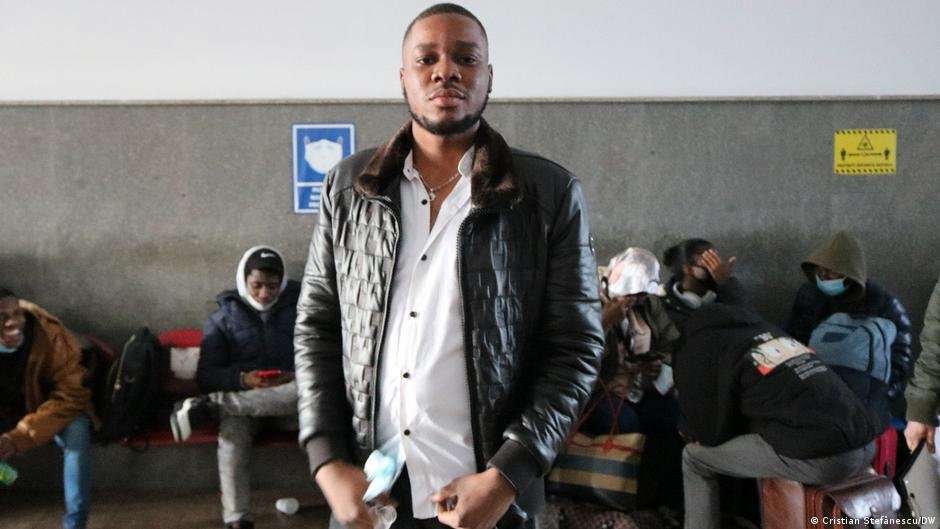 Desmond Chinaza Muokwudo, a 30-year-old Nigerian student who has recently fled Ukraine, spent 11 years saving up for an education in Europe.

Once a pipeline welder from Anambra state, he dreamt of studying international relations – but he struggled with unemployment amid a recession in 2016. It was only after his parents decided to sell their small plot of land that he managed to raise enough funds to pursue his dream.

He finally enrolled last year at university, and had only spent three months in Ukraine when Russia launched its full-scale invasion.

“My parents have nothing left, they can’t support me,” he explained over the phone from his temporary accommodation in Berlin, Germany, sounding defeated.

“My government just tells me to come back home, but there’s nothing waiting for me in Nigeria.”

Mr Muokwudo is one of the estimated 16,000 African students who were living in Ukraine and are now scrambling to continue their studies

Many had a traumatic time fleeing, amid reports of racial abuse at the border.

Nigerian student who fled Ukraine: ‘They are only helping Ukrainians.’

Hundreds have returned home on repatriation flights, though exact numbers are unclear, but thousands like Mr Muokwudo are likely to still be in Europe.

“I have sacrificed too much to get here. I have to stay in Europe, and I have to get an education,” Mr Muokwudo said.

Universities across the world have extended a helping hand to students fleeing Ukraine, in the form of guaranteed places, discounted tuition fees and relaxed visa requirements.

African officials have also increased diplomatic efforts to get assurances for their students, with foreign ministers meeting with their European counterparts to broker deals.

Up to 250 university places are being offered in Hungary to stranded medical students, according to Ghanaian officials – and Ghana’s government reportedly has a deal with Grenada for 200 to be enrolled at the St George’s University of Medicine.

Semmelweis University in Hungary, which is allowing medical students to continue their studies for free until the war is over, says it has received more than 2,000 applications in just a few weeks, mainly from Africans.

However, many students say that these offers are granted on a case-by-case basis and wrapped up in red tape. They largely depend on what degree students are undertaking, how many years they have already completed and how much they can still afford to pay.

Mr Muokwudo complained that some universities would not take non-Ukrainians.

“‘We only take Ukrainian citizens’, that’s what I’ve been told,” he said, referring to a policy at Tallinn University in Estonia.

The university confirmed that only Ukrainians could apply outside the usual admission process but said that international students were still welcome to apply the regular way.

The war has left many of these students with difficult choices – and left some with the prospect of not qualifying.

Nigeria has welcomed back more than 1,000 people, mainly students, from Ukraine, according to a government tally.

Among them was 22-year-old medical student Fehintola Moses Damilola, who was trapped in the besieged city of Sumy for weeks.

“I’m just happy to be safe and with my parents,” he said, speaking to the BBC from his home in Oyo state.

It is his first visit home in more than five years – and he is just one semester away from becoming a qualified doctor.

This is still likely to happen as he is lucky to be able to rely on online classes, which despite the ongoing conflict some Ukrainian universities are offering using the digital infrastructure developed during pandemic lockdowns.

In Nigeria’s Kaduna state, Firdausi Mohammed Usman has also begun online classes. The 22-year-old medical student is in her fifth year at the National Medical University in Kharkiv, an eastern Ukrainian city that has faced nightly shelling.

She said that the professors were holding online practical seminars and some appeared on the screen.

Her teachers are being understandably tight-lipped about their exact location for safety reasons. Some have fled the country, but others are still in Ukraine and leaving basement bomb shelters to host classes upstairs.

“They don’t want us to all drop out or transfer somewhere else – otherwise the university might be forced to close down forever. We don’t have access to our transcripts [academic records], so this is the best option for now.”

‘I don’t want to go backwards’

Mr Damilola, who was president of the Nigerian Students Union in Sumy, also stressed the importance of online classes for medical students in their final year like him.

“It might be hard with this internet, but I only have one semester left and I can’t afford to start at a new university,” he said struggling to be heard as the WhatsApp line kept breaking up.

He also felt that finishing his degree in Nigeria would mean going backwards academically.

Marcel Chidera, from Nigeria’s Enugu state, is continuing his education in Poland, having turned down a repatriation flight organised by his government.

He is not the only one. Angola arranged a flight for its citizens to return home from Warsaw. It expected to take home 277 people, but only 30 boarded.

“Going back home without a degree was not an option,” Mr Chidera said from his temporary accommodation in the Polish capital.

The 25-year-old counted himself lucky as he had only completed a Ukrainian language course so was free to start a new degree.

Most courses in Poland are offered in English and open to international students, though the costs and admission requirements are often tougher than in Ukraine.

He has found a discounted business management degree at a Polish university – and considered himself better off than others in his family in Nigeria where university lecturers have been on a nationwide strike since 14 February.

“My siblings are studying in Nigeria right now. They’re not even in classes because of the strikes,” he said.

Higher education across Africa has long suffered from insufficient funding, a shortage of qualified staff and low investment in research and development, according to local NGOs and UN agencies.

Only 60 African universities made the top 1,500 listed globally, according to World University Rankings.

South Africa, home to the continent’s top universities, has stepped up efforts to help returning students.

Dr Mamphela Ramphele, the former vice-chancellor of the University of Cape Town, the highest-ranking school in Africa, called it “an opportunity to rethink the way we address support to young people”.

That sentiment has appealed to students, like Zoe Inutu in Zambia, who are searching for options at home. She was two years into her public relations degree in Zaporizhzhia, south-east Ukraine, when the war began.

“My transcripts are stuck in Ukraine, so I will probably have to start a new degree,” she said.

“I will go anywhere that will take me, including Africa, as long as I am safe.”

New Year Prophesy: The Police Should Not Determine What Prophecy Be Given – Lawrence Tetteh

We Need To Regulate Our Pricing Environment – Spio-Garbrah

Manchester United: Which Manager To Save The Club?