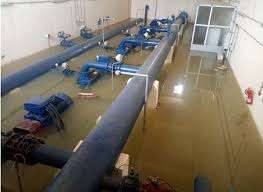 The treatment plant supplying potable water to the people of Buipe in the Central Gonja district of the Savannah Region for both domestic and commercial purposes has been damaged by the increasing flood waters in the area.

As a result, the district capital would be hit by a serious shortage of drinking water possibly beginning from today Monday, October 24. Unfortunately, the community has no alternative means to access safe drinking water and may depend on unsafe water bodies anytime soon.

The entire Buipe Bridge enclave in the district capital got flooded last week, leaving thousands of the people displaced and homeless as a result of the spillage of the Bagre dam and recent rains in the area.

The Paramount of the Buipe traditional area, Buipewura Mahama Abdulai Jinapor II, in an interview with THE CUSTODIAN called for the intervention of the government, benevolent organizations and individuals to come to the aid of the people.

He said the river water in the area has been contaminated by fecal matter and solid waste which makes it dangerous for human consumption.

Buipewura Jinapor intimated, “So now, it is a serious matter, where are we going to get drinking water? Because the river now cannot be taken because the river has been flooded with garbage, toilet and everything, so the river is just not fit to drink.”

He added, “But my subjects may be forced to drink it and if they drink it the likelihood of cholera outbreak is very high. So my appeal to the government, philanthropists, the civil society and even the international community should come to our aid; they shouldn’t wait when people are dying before they will come to help, we’re in a very serious situation.”

The health of a population of about 200,000 people is at jeopardy and the outbreak of waterborne diseases such as cholera, diarrhea, typhoid and polio among children is imminent in the district.

Meanwhile, the situation will also thwart the efforts of the state in achieving the UN sustainable development goals 6 and 3 which promotes clean and sanitation and good health and wellbeing of all respectively by 2030.

I will consult broadly to develop Tamale – Sule Salifu