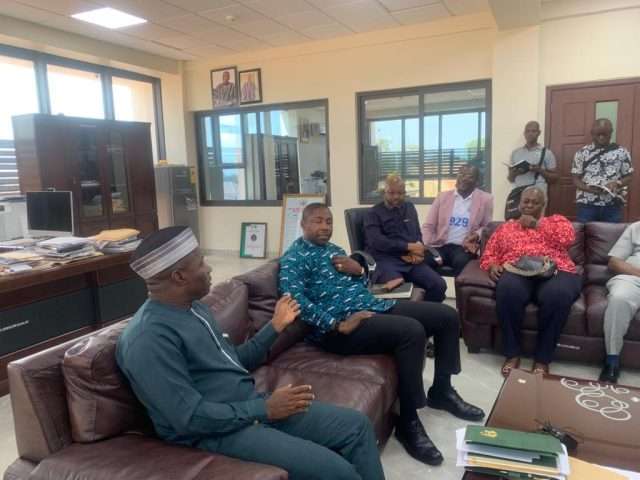 The National Health Insurance Authority Chief Executive Officer, Dr Bernard Okoe Boye has received commendation for his sterling leadership and being proactive for the authority to deliver its mandate to Ghanaians.

The North East Regional Minister, Mr. Yidana Zakaria said the success story about the performance of the NHIS in the region is largely attributed to the good works of the CEO.

He added the coverage of scheme in the region is very impressive regardless of its smaller population compared to other regions and emphasized the records speak for itself.

“Not long ago we received two brand new pickups in these difficult times that we have found ourselves. One for the regional office and the other one for the East Mamprusi National Health Insurance office. We want to thank you sincerely for that.”

The Minister stated before that mobility was a major challenge to the staff and they couldn’t move to the hinterlands to engage the people.

”So when my brother said you are actions man that really indicated truly you are an action man, the two pickups are there but I only want to appeal to my people to use them to serve the purpose.”

Mr. Yidana made these submissions when the NHIA Chief Executive Officer, the Board Members and Management paid a courtesy call to his office on Wednesday, November 30, as part of a weeklong tour of the north.

He further seized the opportunity to call on the Board of Directors and Management to consider the completion of the NHIA Regional Office complex which is more than 70 percent completed.

The structure has been completed, roofed and plastered but the remaining part include fixing of windows, doors, painting and internal décor.

“I can understand the difficulties but where the project has reached it would be part of your success story and the board that you got that project completed” he posited.

He also raised issues about the recruitment of staff into some district offices in the region, adding, I know the Mamprugu/Moagduri district have their office but I think what they now need is the men and women to start work in that office.

“I want put that to you if it is possible to recruit people or you may move staff where you think the numbers are such that when you move one or two it will not affect the output but for recruitment if that window exist, I will recommend you consider the local content” he appealed.

Commenting on the issue of payments at the hospitals, Dr Bernard Okoe Boye said there should be no reason to take money from Ghanaians and further explained that, “sometimes some of the charges they [hospitals] make when you go deep, they try to find reasons why they have to do those things but the sad aspect is that some of the charges have no basis, it is serious impunity, just because they assume nobody is interested in what they are doing but I assure you, Minister, that we [NHIA] are interested.”

He disclosed that the authority with the approval of the board has formed a committee known as “illegal payment committee” to investigate the conduct of some hospitals in the country at both regional and district levels.

He added the NHIA has the authority to redraw the credentials or license of any hospital found culpable and assured actions will soon be taken on such conduct at the health facilities.