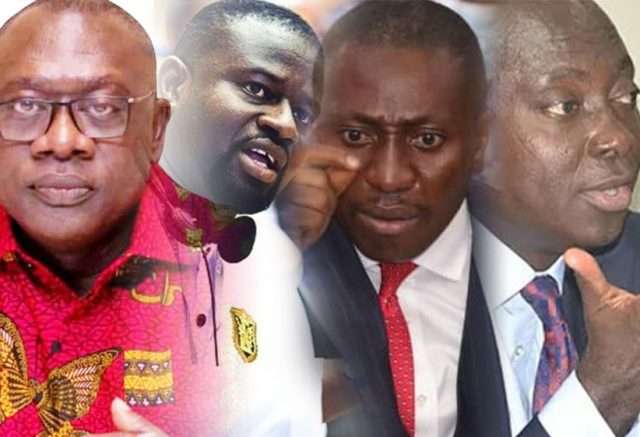 The first motion is requesting the House to investigate “alleged interference by some members of the security agencies and some vigilante groups before, during, and after presidential and general elections since 1993 resulting in injuries and loss of lives and make consequential recommendations.”

The other motion is also asking Parliament  to investigate the “ethnic, gender, regional and other sectional backgrounds of persons recruited into the security forces since January 1993, to establish the level of ethnic, regional and gender balance in the recruitment and appointment to such public offices and make appropriate recommendations.”

However, the two motions are seen as a counter to two earlier ones filed by six members of the Minority National Democratic Congress (NDC) in Parliament on March 23.

The NDC MPs are also urging the House to investigate “inappropriate interferences by members of the state security agencies of Ghana in the Presidential and Parliamentary Elections of Ghana in 2020, and in particular, the violence perpetrated against citizens, causing injuries and leading to loss of the lives of Tajudeen Alhassan (39 years), Abdallah Ayaric (18 years), Emmanuel Dompreh (36 years) Samira Zakaria (36 years), Ibrahim Abass (30 years), Rita Otto (15 years), and Fuseini Musah (14 years) in the 2020 Elections and make consequential recommendations.

Furthermore, they are requesting Parliament to probe “the recruitment practices of the state security agencies of Ghana between the period 2013 and 2020 and to establish the levels of transparency and fairness of those practices and make consequential recommendations”.

According to them, the Inspector General of the Ghana Police Service (IGP) and other security agencies reneged on a promise to Parliament and Ghanaians to protect lives.

However, in response, Majority Leader and Minister for Parliamentary Affairs Osei Kyei-Mensah-Bonsu, described the minority’s motion as hypocritical.

Later in an interview, Bawku Central MP Mahama Ayariga welcomed the Motions from the NPP MPs, saying this indicates that the majority side agrees with the minority on the need to investigate electoral violence in the country.

“I support every effort to identify any form of violence that took place during our national elections and to hold people responsible for such acts accountable.

“So that people know that during the electioneering campaign, and during elections itself and during the process of the collation of results, if any law enforcement agent crosses the line it will not matter in whose favour, the conduct will be investigated and the persons held accountable,” he stated.

Former Chief Executive of MASLOC Dr Stephen Amoah also argued the time period for investigating political violence in the country should not be limited to only a particular era.

Historical records, he said, show from 1992 every general election had experienced some level of violence with many people injured or killed.

“Let’s expand the investigation so that we know the root cause of all election violence and ensure that we find an eternal solution to them,” he said.

Admin - November 23, 2020 0
The Paramount Chief of Kworli Traditional Area in the Zabzugu Constituency of the Northern Region, Naabakpema Mahama Ahmed Mahama has said that the people...
Business

Admin - June 25, 2021 0
Governor of the Bank of Ghana Dr. Ernest Addison has asked Parliament to allow the law to settle matters in the ongoing legal tussle...
General News

Admin - August 21, 2021 0
Delegates of the New Patriotic Party, NPP, in the Bunkpurugu constituency in the North East Region have declared their support for Vice President, Dr...
General News

Admin - April 1, 2021 0
The World Health Organization (WHO) has criticised the rollout of coronavirus vaccines in Europe as being "unacceptably slow". It also says the situation in the...