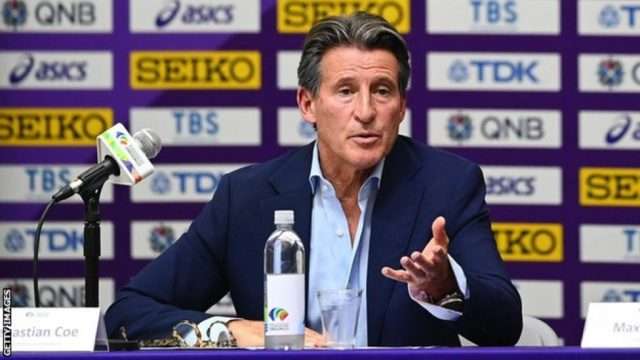 Dozens of athletes have encountered delays in receiving permission to enter the United States to compete in Eugene.

African champion Ferdinand Omanyala may miss the heats of the men’s 100m after the Kenyan only obtained his visa a day before the start of his event.

“We will work right up to the last minute but will we be able to resolve all those issues in time for the start of competition? No, we won’t be,” Lord Coe told BBC Sport Africa.

“The one thing which is clear to me as we battle to do as much as we possibly can. It is complicated. In relative percentage terms, it’s a small number but it’s of no comfort if you are in that category.”

Around 100 athletes, coaches and officials are still waiting for their cases to be resolved – with many of their applications expected to fail – and multiple world and Olympic gold medallist Michael Johnson has criticised organisers in his homeland.

“This would never happen in a truly professional sport!” the BBC Sport pundit tweeted regarding Omanyala’s case.

“Coe said these World Champs are an opportunity to grow the sport in the US. But gave no strategy.

“Step #1 is these Champs succeed. Like insuring people can get visas in a notoriously difficult process?”

Ivory Coast sprinter Marie Josee Ta Lou also took to social media to speak out on behalf of her fellow athletes, imagining their frustration having worked so hard to be at the championships.

This year’s World Championships in Oregon are the first to be held in the United States, with the country’s strict entry requirements providing another hurdle to some foreign competitors.

Kenyan 10,000m runner Sheila Chepkirui is due to race on Saturday, but said she still did not have the required stamp in her passport despite having her visa approved in May.

“Tears and pain. Silence,” the 31-year-old wrote on Instagram. “I’ve been shaken and hurt.”

Chairman of World Athletics since 2015, Lord Coe said the issue was “multifaceted” and part of a “very complicated landscape”.

“There is not just one particular issue that swamped all the others,” he added.

“Some of the challenges have been in a Covid recovery economy, lack of staffing and the length of time that it has taken to get face-to-face appointment, and sometimes the length of travel.

“Of course, there are political complications as well, about nations being able to travel and nations coming into the United States.

“There are lessons to be learned but the key learning is this is a very complicated landscape. There isn’t one thing which you can look at and say it’s the dominant problem.”

The United States Olympic and Paralympic Committee (USOPC), Oregon22 organisers and World Athletics have dealt with 374 cases, with 255 resolved and 20 refused.

In some cases, athletes have had delays in getting interviews, or applications have either been late or contained incorrect information.

“We are happy to the extent we can be with our work with the USOPC in all our effort to get this done,” Washington told BBC Sport Africa on Thursday.

“Of the 5,500 participants that needed visas, less than 1% have either not had the visas, been denied or are still being resolved.”

“What complicates the situation is also the fact that Covid came in the middle of all the process.”

No Way; You Can’t Reopen Your Case – Judges Tell Mahama

Foreign Minister Ayorkor Botchwey’s full statement on the Security Situation In Ukraine And The...