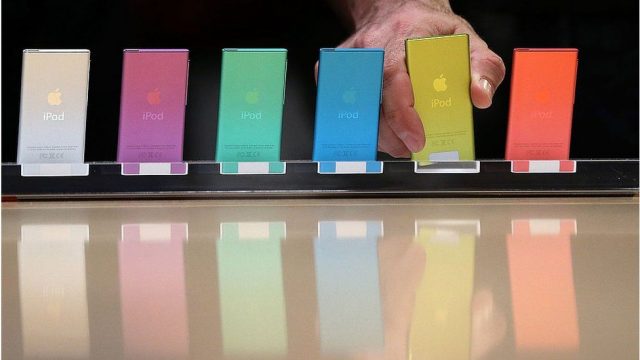 Apple has announced that it is discontinuing its original music player, the iPod touch. The firm says it will remain available to buy “while stocks last”.

The iconic MP3 player launched in 2001 and could store 1,000 tracks. Today there are more than 90 million songs available via Apple’s streaming service Apple Music.

It was designed by Tony Fadell, who later invented the iPhone.

Greg Joswiak, senior vice president of worldwide marketing at Apple, said the gadget had “redefined how music is discovered, listened to, and shared”.

Ben Wood, chief analyst at CCS Insight, told the BBC it was always inevitable that the iPhone would one day replace the iPod.

“When Apple created the iPhone it knew that it would ultimately mean the beginning of the end of the iPod,” he said.

“It really is astonishing that it is only 15 years later that the iPod has reached the end of the road.”

Carolina Milanesi from Creative Strategies said that the decline of iPod sales was connected to the rise of iPhone sales – like the move from digital downloads to streaming.

“The demise of the iPod is probably the best example of Apple not being concerned about cannibalising its own products,” she said.

The iPod wasn’t the first MP3 player on the market, just like the iPhone wasn’t the first smartphone – but that unique Apple design proved to be the push digital music needed to start to tempt people away from CD and cassette players – and file-sharing.

In 2001 the music industry was fighting for survival against illegal file-sharing as tunes were ripped and shared on platforms faster than the record labels could issue legal threats.

The launch of iTunes, and the iPod shortly afterwards, provided it with a lifeline in the form of revenue for legitimately purchased downloads.

It also revived the fortunes of Apple, which was languishing in a market dominated by Windows PCs.

It was introduced on stage by the late Steve Jobs at an event on 23 October 2001.

“With iPod, listening to music will never be the same again,” he said. And in many ways, he was right.

Give COVID Vaccines To All Countries – Akufo-Addo To EU

Admin - September 9, 2021 0
MTN Ghana, as part of its 25 th Anniversary celebration, has committed an amount of GHc10 million to the Ministry of Communication...
Gadgets

Selasi Aklotsoe - May 13, 2022 0
Google has unveiled its first smartwatch at its annual developer conference. The Google Pixel Watch combines its own Wear...