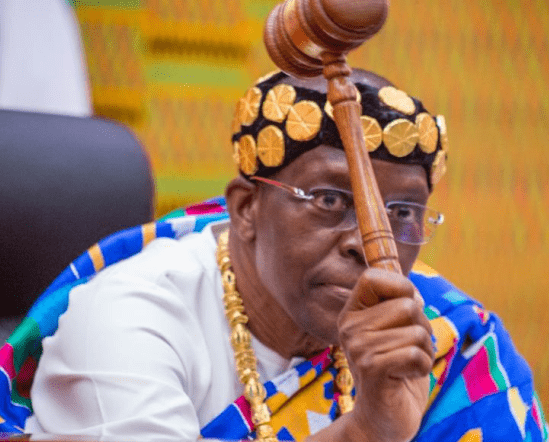 Speaker of Parliament Alban Sumana Kingsford Bagbin has cautioned Members of Parliament (MPs) to desist from hailing him with the accolade, ‘Father ooooh Father’ whenever he is in a procession to the Chamber.

He reminded the lawmakers that such occasions were solemn moments that should be observed as such.

Giving the caution in his formal statement to the House on Wednesday, Speaker Bagbin explained that, “The procession of the Speaker into the House is a solemn occasion, members are to be up standing and be quiet and silent. I have told your leaders a number of times to inform you that it is unparliamentary, it is against the practice and culture of Parliament for people to be talking or even hailing the king (or the queen) when he is leading the procession into the House of Commons. It is not done anywhere.

“Since that has not been done, I am compelled to do it myself on the Chair. Yes, I am the Father of the House but that should not be said when we are in a procession coming into the House. So, please let that be the end of ‘Father ooooh Father’. I am grateful for the elevation but at least, we must go by the ethics of our career”.

With regards to wearing made in Ghana attires, Mr Bagbin who was clad in a beautiful Ghanaian kente cloth over white jumper and a gold-plated traditional crown on his head, entreated the legislators to show exemplary leadership

“I have shown the way, if you will not follow, you will be left behind, posterity will judge all of us.

“We must value Ghana, we must market Ghana, and we just don’t do it by word, we also do it by action. I said from the very beginning that I expect to see many of you in traditional wear but unfortunately, you are all stocked up in the past, except a few. Once again, I am compelled to say this, that is how you provide a market for your own produce”, he added.

“You think it is for nothing? That is how you grow. Please, as leaders, let’s show the way and our people will follow”, Speaker Bagbin quizzed.

He also lauded the minister for being very humble and down to earth.

Amid laughter from some members of the House, Mr Bagbin said, “Yes. Yes. it is true. I have known him for many years, he is a man of principle, and he holds his views firmly whether you disagree with him or not.”

Mr Bagbin, a former lawmaker for Nadowli-Kaleo constituency for consecutive 24 years added, “Many of you obey the wind, you don’t have your own positions on many issues. People just come to you and you just follow. Follow, follow. We must change. God has made us different, and that has made the world an interesting place for us to live in. You do not have to always follow somebody’s ideas or his values or principles; hold your own, that determines who you are. Your character.”

The Speaker praised Mohammed-Mubarak Muntaka, the MP for Asawase and Minority Chief Whip for being the longest serving Chief Whip of the House.

He said Mr Muntaka performs his works very well, adding that, “and he is known to be a very committed Muslim and he dresses as such”.

The Speaker also commended Mr Kennedy Ohene Agyapong, MP for Assin Central, for being a man who speaks his mind, saying, “you can disagree with him (Mr Agyapong) but he speaks his mind”.

Charles Bulu not at risk of losing out on officiating FIFA matches despite collapse...

US Central Bank Raises Interest Rates For First Time Since 2018...

Admin - March 18, 2022 0
The US Federal Reserve is raising interest rates for the first time since 2018 in an attempt to bring fast-rising prices under control. It said...
News

Admin - June 13, 2022 0
The Regional Nasara Coordinators for all the 16 Regions of the country yesterday stormed the NPP National Headquarters to pick and pay for the...
General News

Admin - March 16, 2020 0
The Member of Parliament for Effutu Constituency has for called for criminal charges to be brought against the staff of the National Blood Service...
News

Admin - December 1, 2021 0
By Musah Yahaya Imagine travelling two kilometres and back three times in search of water every morning before preparing for school. That is not the only...
Business