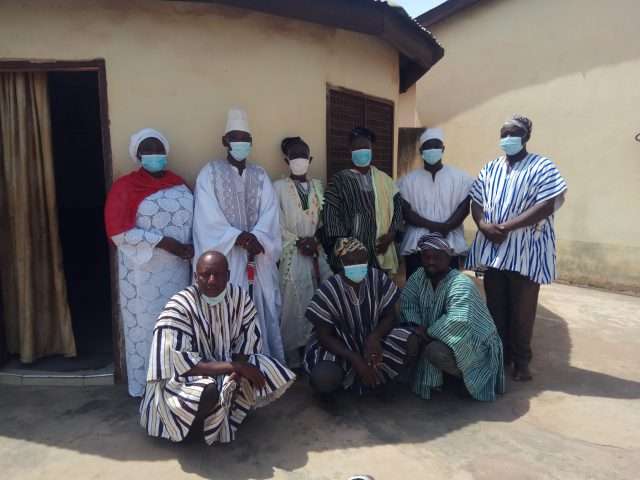 The newly enskinned Balewura in the Bole traditional area, Alhaji Gilbert Seidu Iddi, has paid a royal visit to the Paramount Chief of Sagnarigu in the northern region to strengthen ties between the two traditional areas.

The Balewura was accompanied by the spouse, some elders and kinsmen to express his profound gratitude to the Sagnarigu traditional ruler, Naa Yakubu Abdulai, for sending a powerful delegation including cultural troops to honor his coronation at Bole in the Savannah region few weeks ago.

He added the colorful ceremony was a great success due to the overwhelming support of the Sagnarigu Chief.

The two intellectuals in their respective professional endeavors have over five decades of personal and working relationship between them after first meeting in the Bawku secondary school in the 1960s.

To this end, the Balewura Tempir Fi Ababio explained to THE CUSTODIAN the longstanding personal relationship between them is now being raised to a higher level in the traditional spheres.

So for any opportunity when the need arises for any kind of integration, cohesiveness and whatsoever, it will be an opportunity for us in the two kingdoms” he added.

Royal visits among traditional leaders particularly among the four big traditional kingdoms in the Northern, Savannah and North East regions are very rare and the step taken by the Balewura Tempir Fi Ababio is significant to building peace and inter-ethnic cohesion and development.

The former Northern Regional Minister emphasized his focus for accepting the Chieftaincy responsibility is to galvanize the support and collaboration of other traditional leaders in the various jurisdictions to clamp down on inter-ethnic violence which has affected development in the northern ecological area.

The Paramount Chief of Sagnarigu, Naa Yakubu Abdulai on his part, said Dagombas and Gonjas have come a long way in many centuries and disclosed with time both ethnic groups have intermarried making them biological relations now.

The former Diplomat believes the resultant effect is the coexistence amongst the two ethnic groups. He further expressed confidence in his one year senior in secondary education to successful discharge his traditional duties and prayed to God bestow the requisite wisdom in him to steer the affairs of his subjects.

I blame Akuapem Poloo for her predicament – Inusah Fuseini

Admin - April 10, 2020 0
The Importers and Exporters Association of Ghana is raising a suspicion of a grand scheme by some shipping lines to thwart government's...