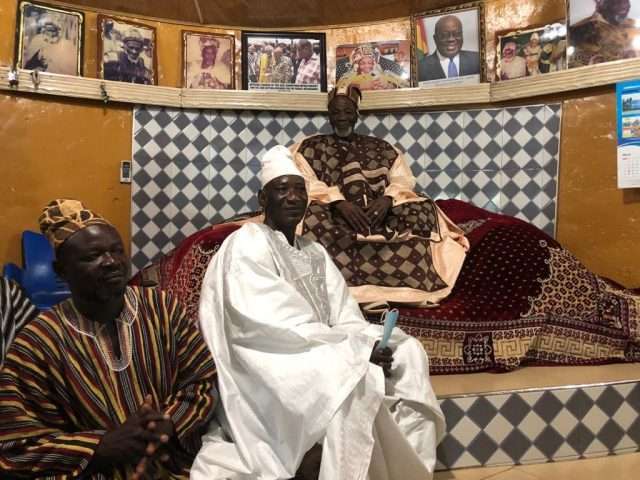 The Balewura Tempir Fi Ababio, Gilbert Seidu Iddi, on Monday (26 April, 2021) paid a royal visit to the Gbewa Palace in Yendi to thank the Overlord of Dagbon, Ya Naa Abukari II for the immense support during his coronation at Bole few weeks back.

The Ya Naa during the investiture of the former Chief Executive Officer for the defunct Savannah Accelerated Development Authority (SADA) sent a delegation of chiefs to grace the occasion at Bole in the Savannah region.

The former Northern Regional Minister said the meeting with the Dagbon overlord was a step aimed at enhancing the working relationship between the two traditional groups in order for the necessary socioeconomic development to thrive in their respective communities.

I am very much elated by that opportunity, he said, adding that, “It has been a very healthy discussion and during the meeting I realized that the Ya Naa was overwhelmed with joy just as I am, and we can work together in spite of the ethnic diversity.”

However, the Balewura lamented the status of education in his traditional area is a major for the people, stating there is a lot to be done to improve the standards of education in the area. He noted the children just as their peers in other areas are determined to acquire formal education but the structures are not permissible.

“When you go there, the standards, particularly the primary schools, you can hardly hear the students speak English and it is one of the challenges I want give attention to” he added.

He further outlined access to portable drinking water, health and agriculture mechanization as part of his immediate plans to tackle.

“Health is sine qua non, it doesn’t matter what you want to do and we have to make sure that there is good health systems or we cannot achieve our objectives. I was also impressed with the water situation when I first visited the area and we’re trying to see what we can do about it.

It is also an agricultural area and the people are mainly farmers but a lot of the modern farming equipment are not available at the local level and I thinking the ways we can manage to ensure they benefit from such facilities just to modernize their agricultural activities. I was also impressed with the water situation in the area and we’re trying to see what we can to ensure there is access to portable drinking water”

The former SADA Chief Executive emphasized these are the low hanging fruits that he intends to tackle before thinking about the more complex issues affecting the Bale traditional area.

The former Chairman of the Northern Regional Security Council promised to champion a crusade against insecurity in collaboration other traditional leaders and highlighted the impact of ethnic conflict in the region.

According to him, the peculiar challenge in the north has been the pockets inter and intra communal violence undermining growth and development.

“And I think that we should be able to work together now that we’re beginning to build bridges across the traditional authorities, if we are able to get it on course, we will be able to address that challenge and achieve our objective in that regard.

While in office as a Regional Minister in the northern region, I realized the biggest challenge in the region was ethnic conflict. But the division of the region into three parts has gone a long to ease some of the tension as a result of ethnic difference, because, those particular tribes have a lot in common and so we don’t expect large scale of that problem to exist and that is the consolation” he opined.

Meanwhile, the Dagbon King for his part promised to work closely with the Bale Chief to mitigate the socioeconomic needs and impoverishment of their traditional jurisdictions.

He prayed for the Balewura to ascend to high skins in the traditional skim of affairs. He charged him to replicate his good work during his service to the nation and organizations.

Work hard for NPP to win all 47 seats in Ashanti region – Second...

IMF Bailout: This Too Shall Pass – Prez. Akofu-Addo