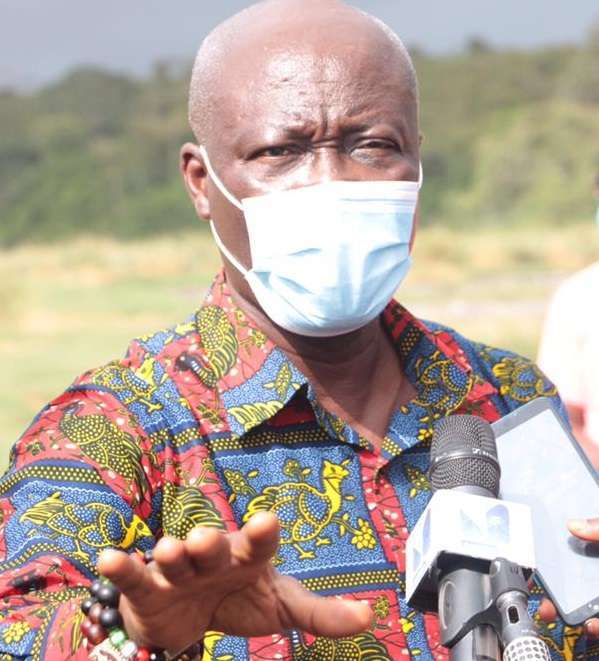 The Member of Parliament (MP) for Odododiodoo, Nii Lante Vanderpuiye has stated that the 10 Pesewa Sanitation and Pollution Levy described in Ghanaian parlance as ‘Borla’ (refuse) levy will enhance the management of Landfill sites in the country.

Mr Vanderpuiye who is also the Ranking Member on the Parliamentary Select Committee on Local Government said the delay in the release of funds for the management of landfill sites would be a thing of the past with the introduction of the new levy.

The MP made the statement during a working visit to the Kojokrom landfill site, Takoradi in the Western Region by members of Parliamentary Select Committees on Sanitation, Finance and Local Government on Monday.

“We are happy the Sanitation and Pollution Levy has come. The levy will go a long way and help us in the management of the landfill sites”, the Odododiodoo MP and a former Deputy Minister for Local Government and Rural Development emphasized.

He also expressed worry over the delay in the release of funds to the Assemblies in the management of landfill sites and suggested a situation where funds should be released directly to the Assemblies for the aforementioned purpose as opposed to the usual centralised process of releasing funds.

The visit, which would take the Parliamentary select Committee Members to landfill sites in eight regions being managed by Zoomlion Ghana Limited is to enable them ascertain the progress of work and accordingly advise government through Parliament.

On his part, the MP for Zabzugu Jabaah John Bennan expressed disappointment in the way the sector Ministry has failed to adequately resource the Assemblies to carry out their function in respect of landfill management.

He revealed that since 2017, the Ministry of Local Government has not been able to support the Metropolitan Municipal and District Assemblies (MMDAs) in that regard.

The MP who was the former MD for Rusaben Waste management further disclosed that “I started managing dump sites in Takoradi and I closed down the Kojokrom dump site”.

He therefore urged government to take the issue of landfill management in the country seriously and called for action to be expedited in the release of funds.

The MCE for Sekondi-Takoradi Mr. Abdul-Moomen Issah assured the Committee Members that the Assembly is ready to for the rains upon a question by a member of the Committee.

He indicated that plans are far advanced to ensure that the gains made in the management of the landfill sites are not destroyed by the impending rains.

Mr Issah also mentioned the lack of funding as one of the issues impeding the work maintaining the sites, saying “as an Assembly we have a limit, we have other responsibilities as well”.

The MCE however expressed the Assembly’s commitment to decommission the landfill sites.

Fallen Through The Cracks

Admin - May 23, 2022 0
Police in Nigeria are investigating the beheading of a local MP in the south-eastern state of Anambra barely a week after gunmen kidnapped him...
News

Admin - August 10, 2020 0
The Electoral Commission (EC) has launched an investigation into alleged illegal registration of foreign nationals in the just ended mass voter registration exercise. According to...
News

Admin - December 23, 2020 0
The driver of the National Democratic Congress’ Deputy General Secretary, Peter Boamah Otokunor has been arrested by the National Intelligence Bureau (NIB). According to reports,...
News

Admin - November 9, 2020 0
Guan District made up of Santrofi, Akpafu, Likpe and Lolobi (SALL) in the Oti Region has been created following the maturity of a Legislative...
Health

Admin - April 29, 2020 0
Vice President Dr Mahamudu Bawumia has congratulated the Kwame Nkrumah University of Science and Technology (KNUST) and Incas Diagnostics for their breakthrough in developing...