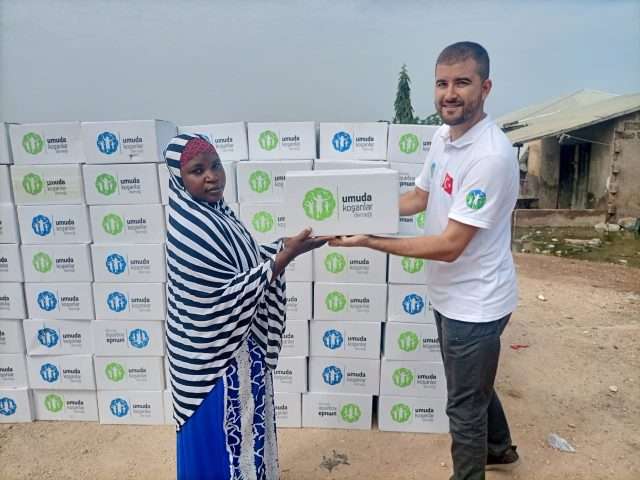 The displaced flood victims in the Central Gonja district of the Savannah Region have received food items from nongovernmental organizations from Turkey. The philanthropists from the West Africa Humanitarian Aid (WAHA) working under its mother body, Umuda Kosanlar in partnership with ESRA Foundation distributed 500 boxes of food items to the victims on Wednesday, November 2, 2022.

The non-profit making organization are the first international organizations to come the rescue of the people after the floods submerged Buipe and left over thousands of people homeless three weeks now.

The Director of WAHA, Mr. Selman Ozpinar, told THE CUSTODIAN each box contains rice, cooking oil and tomatoes among others.

“It was last week that we heard about the Buipe floods and we came to see that it was a big issue, so we discussed with different Turkish NGOs and today we came with five hundred boxes of food items to share to the people.”

Mr. Selman however an observation that the victims also need items such as mattresses and lamps among others especially those have been camped in school blocks and tents.

“We have also taken pictures and videos from the situation to share with other NGOs from Turkey so that they will also come here. We will go back and see how we can try to comeback to support the people more” he added.

The Paramount Chief of Buipe, Buipewura Mahama Abdulai Jinapor II, in his remarks commended the NGOs for their swift intervention and thanked them immensely for the food items.

“We render our heartfelt gratitude to the Turkish government and of course to the NGO who have brought us this relief items. We all know the first is the stomach and they brought us a lot of food to share to the victims and some are left that would be shared to them again; we appreciate their efforts and we pray God bless them.”

Meanwhile, the Director also disclosed his outfit is into the construction mechanize boreholes for underserved communities across Ghana as well as supporting schools for persons’ with visual impairment and the deaf.

The District Director of the National Disaster Management Organization, Mr. Mustapha Nbonwura, in a separate interview told THE CUSTODIAN the water level is still increasing on daily basis.

This, he lamented continues to affect more lives in neighboring communities and therefore makes it difficult for him to give definite figures of the victims.

Maintaining a Steady Animal Production During The Covid-19 Pandemic

Protection Of Environment Is A Collective Responsibility – EPA Deputy Boss