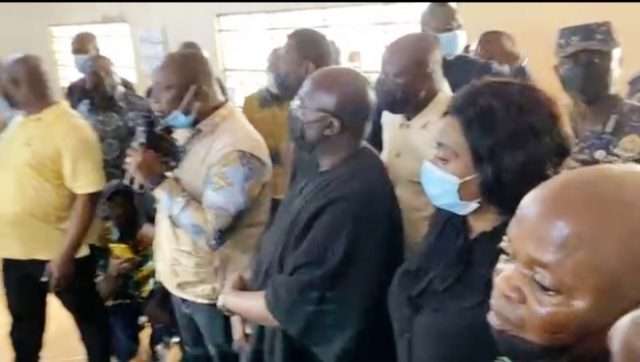 The Vice President, Dr Mahamudu Bawumia, has led a powerful government delegation to commiserate with victims of Thursday (20th January, 2022) explosion at Apiate near Bogoso in the Prestea-Huni Valley district of the Western region.

The delegation includes Minister for Lands and Natural Resources, Samuel Abu Jinapor, Minister for Information, Kojo Oppong Nkrumah, Minister for Interior, Ambrose Dery, the Inspector General of Police, Dr Akuffo Dampare among several other officials of state to have first-hand briefing of the disaster that occurred involving a truck loaded with explosives belonging to one of the mining companies in the area.

Thus far, Dr Bawumia indicated some 13 people have died as a result of the incident and about 59 other individuals have sustained various degrees of injuries. In addition, he noted about 179 families have been affected by the explosion.

The Vice President hinted the numbers may increase as the national response team gathers more information in the course of their work.

The government on its part, Dr Bawumia said, will do everything to support the disgruntled families and persons who have sustained injuries and presently receiving medical care in parts of the country.

“Thankfully, the ambulance service has played a major role in the rescue – because the rescue effort was very well coordinated by the security services; the police, fire, NADMO, air force, the ambulance service, the district security team – everybody came together and we were very fortunate that we could call on eleven ambulances to come in to support this rescue effort that took place yesterday” he extoled.

He added the government has also taken steps to ensure the injured victims are given the best medical care in the country, stating, “Some have been sent to Tarkwa, some sent to Kumasi and some would be sent to Accra to get the best care that we can afford them”.

Dr Mahamudu Bawumia further said the government has considered rebuilding the houses destroyed in the community.

“So, I want to assure Nananom [Chiefs] that His Excellency the President has given us directives – I have already spoken to the state housing corporation and with them and in consultation with the mining companies around here, we will quickly try to put in place facilities that would help those who have been displaced – that is going to be one of the priorities for all of us” he assured.

He continued, “Just to assure you that the government is fully engaged in all these process and we are going to see to it that the people here are well taken care of; we will learn lessons and those are going to be much later on but for now, we’re very much concern about how to complete this rescue effort, how to take care of the injured, how to take care of the families and people who have survived and we will work collaboratively to ensure that happen.”

Meanwhile, President Nana Akufo-Addo in an earlier statement to commiserate with the disaster victims on Thursday said the government will spare no effort to ensure a rapid return to a situation of normalcy for the inhabitants.

He further tasked a National Emergency Response Team to swiftly intervene to contain the situation and charged the National Disaster Management Organization (NADMO) to see to it that rapid relief items are brought to the people.

We will go after the warmongers on social media – Defense...

Admin - November 10, 2021 0
The Minister for Defense, Dominic Nitiwul has assured the Overlord of Dagbon, Ya Na Abukari II of the government’s resolve to search...
General News

Admin - May 11, 2020 0
The Municipal Chief Executive for Sagnarigu, Hajia Mariam Iddrisu has distributed a total of 10,000 free nose masks to traders, shops, public...