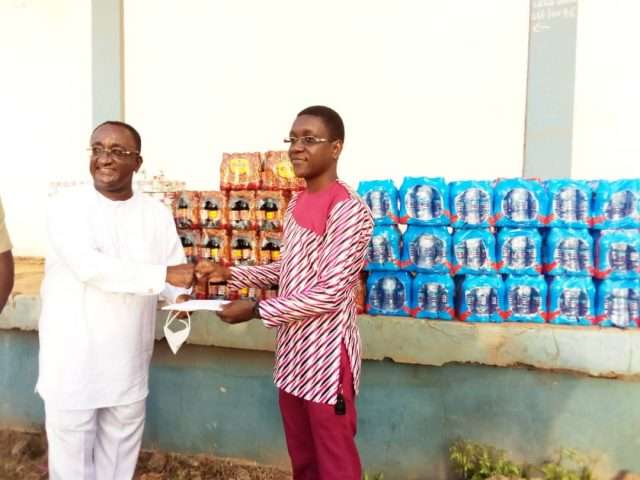 The Minister for Food and Agriculture, Dr Owusu Afriyie Akoto has presented cartoons of assorted mineral water, soft drinks, milk and an undisclosed cash amount of money to support the blood donation exercise spearheaded by Tamale based Radio Diamond in commemoration of the 2021 annual Damba festival in the northern region.

The Minister said the items donated are to sustain the protein intake of the vulnerable people especially the children who are denied this because they come from very poor background and underserved communities.

He lauded the initiative and further commended the radio station for undertaking such intervention, stating there are not many institutions performing such responsibility and as result, “I am very touched with this gesture of the radio station”.

“I am here as somebody who is very keen in helping the poor and as a Roman Catholic Christian growing up, this is what I was thought as a child that if you have something, you need to share; very very important and this is what has attracted me to support the radio station on this noble course.

“And when I heard about this at Walewale, I couldn’t just comeback to Tamale to take my flight back to Accra, I had to come into town to support this very noble course that this radio station has given to itself – helping the poor; using the festivity of the Damba to ensure that those in the society who are not endowed are also supported” he asserted.

The former lawmaker for the Kwadaso constituency in the Ashanti region seized the opportunity to call on responsible citizens, private and public corporate institutions to support similar courses during this kind of festivities to put smiles on the less privileged in the society.

Meanwhile, the radio station annually conducts the blood donation exercise to supply the blood banks at the Tamale Teaching Hospital, the Tamale Central and Tamale West Hospitals. In addition, free health screening is conducted for residents in the northern regional capital, Tamale.

The managers also register widows and orphans onto the National Health Insurance Scheme and also renew expired NHIA cards for these vulnerable groups in the Tamale metropolis and its environs.

Doctor Jailed For Manslaughter And Lying About His Age In UK

Schools Will Remain Open Despite Strike By Teachers – GES

Transportation Fares To Increase Next Week

Admin - February 11, 2021 0
The Supreme Court has in a unanimous decision ruled that the Chairperson of the Electoral Commission, Jean Mensa and Peter Mac Manu cannot be...
General News

Admin - February 9, 2022 0
The Institute of Local Government Studies is being retooled and revamped to be able to provide structured training to all categories of local government...
General News

Government Should Hold Achimota Land And Use The Rest In Broader...

Selasi Aklotsoe - May 18, 2022 0
OccupyGhana is advising government to hold the rest of the Achimota land, maintain some of it as a green belt, and use the rest...
General News

Admin - April 1, 2022 0
As part of an initiative to give back to the community, EcoZoil Services (formerly Zoil Eco Brigade), a subsidiary of the Jospong Group of...
General News

Admin - March 9, 2020 0
Minister of Sanitation and Water Resources Cecilia Abena Dapaah has insisted Accra is clean following the pronouncements that the capital city is engulfed with...