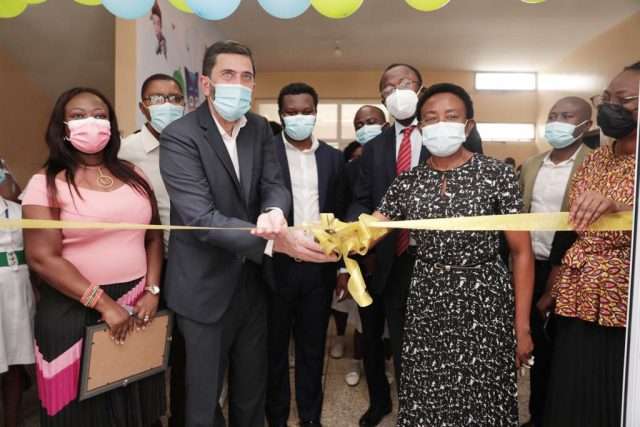 Dredge Masters Limited, a subsidiary of Jospong Group of Companies (JGC), has helped to renovate the Cardiac and Renal Unit of the Child Health Department at the Korle Bu Teaching Hospital (KBTH).

The renovation which was undertaken on the second floor of the three-storey Child Health Department of the KBTH was done at a cost of one million, eight hundred and twenty-three thousand, two hundred Ghana Cedis and forty-one pesewas (GHS1,823,200. 41).

At a ceremony yesterday, to handover the refurbished unit to the management of the hospital, the Deputy Managing Director of Dredge Masters Limited (DML), Samuel Borquaye, said the project was undertaken as part of his company’s corporate social responsibility which is giving back to society.

“However, it is sometimes difficult to identify relevant projects that will be impactful and sustainable, so when the call came for us to support this project, we were very happy knowing the kind of impact that it will have on our children and the country,” he said.

He said giving back to society was one of the core values of Dredge Masters and that the company will remain committed to that core mandate. He disclosed that the project took about three (3) months to be completed

Others, he said, included the removal and replacement of all floor tiles in the washrooms, all offices and all other rooms at the unit.

“Provision was also made for a kitchen cabinet for the kitchen,” he said

According to him, the entire wards and offices were painted as well as art works in the facility.

The artworks, he explained, was done to make the children “feel homey when they are in the hospital,” adding that there was also removal and replacement of all defective electrical works.

“We firmly believe that these changes will go a long way to help improve the quality of care for these little ones at the hospital and enhance patient recovery,” Mr Borquaye said

The Chief Executive Officer of KBTH, Dr Opoku Ware Ampomah, commended Dredge Masters for heeding to their call to give the second floor of the Child Health Department a facelift.

According to him, one unique aspect about this department was its heroic deeds in constantly and tirelessly working to saving lives of children.

“…and aside from its heroic works, it is one department whose quality of service cannot be questioned,” he pointed out.

In this regard, he praised the leaders and staff members of the department for their hard work in always saving children’s lives.

“The staff [members] at this department are doing a solid work and need to be commended, cautioning that any nation that jokes with the health of its children does so at its own peril,” he noted.

Dr Ware Ampomah said about 6,000 children are admitted yearly at the department “not only with normal cases, but also with very complicated ones.”

He, therefore, stressed the need for the department to be adequately resourced to enable it continue to dispense the quality service it was noted for to children who are brought to the facility.

“It is important that we all come together and support the Korle Bu Child Health Department to secure the health of our children,” the CEO of KBTH appealed.

He gave the assurance that management of the hospital will ensure that the facilities provided are maintained to give quality service.

The Head of the Child Health Department, Professor Christabel Enweronu Laryea, was full of praise for Dredge Masters.

“We are very grateful to Dredge Masters and Jospong Group of Companies for coming to our aid. It is one of the biggest supports the department has received,” she elatedly expressed.

She lamented that it was very difficult managing the ward, in terms of its infrastructure, many of which were in very deplorable state, especially looking at the fact it was one of the oldest departments of KBTH. She said so many Ghanaian children have passed through the department.

She used the occasion to appeal to other well-meaning Ghanaians and corporate bodies to invest in the healthcare of children.

Dredge Masters Limited is a dredging company that seeks to reduce natural disasters caused by flooding through dredging of canals and dams.

Its specialty lies in inland and reservoir dredging, near shore and capital dredging, coastal and environmental dredging and maintenance dredging, reclamation and sea defense projects.

How Some People Try To Insult Me With My God-Given Beauty Amazes Me –...