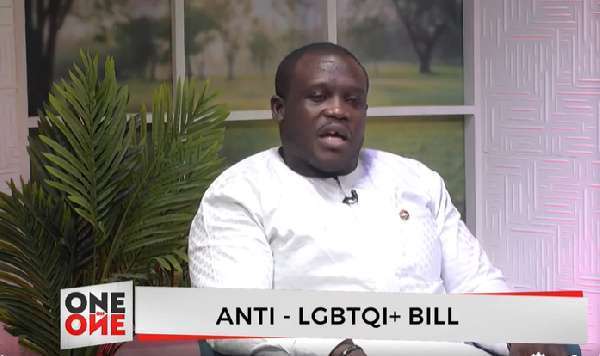 Ningo Prampram Member of Parliament, Sam Nartey George is happy about developments in Italy’s Upper House of Parliament after lawmakers shot down a law aiming to give protection to LGBTQ+ persons.

According to him, the development shows that Ghana is not alone in fighting to protect “our value system.”

“Ghana is not alone in fighting back to protect our value system. Hungary took a bold step recently. Texas made a bold statement few days ago and now Italy also takes a stand,” he posted on Twitter.

The story said despite the said bill having been passed by the lower house of Parliament, the Upper House had voted to block debate on it. The bill essentially aimed to make violence against women and LGBT+ people a hate crime.

The 315-member Senate voted by 154 to 131 to block further debate on the bill after centre-right parties said the text would curb dissenting opinions on LGBT+ issues, including those who maintain that a family requires the union of a man and a woman, the Reuters report said.

The Vatican, the report said formed a strong part of the opponents to the Bill in a country where same-sex civil unions have been legalized since 2016. Previous moves to criminalize homophobia and transphobia have failed over the last 25 years.

A leading pro-LGBTQ+ group in the country says Italy records over 100 cases of homophobic attacks yearly, the basis on which proponents had wanted the now rejected Bill passed.

With the debate on it suspended, it can only be resubmitted six months later with a number of MPs admitting that its passage could be impossible before the next legislative vote in 2023.

The LGBTQ+ Bill before Parliament is titled: “The Promotion of Proper Human Sexual Rights and Ghanaian Family Values Bill 2021.” It is a Private Members’ Bill sponsored by a bipartisan group of lawmakers.

A group of 18 academicians and human rights defenders have voiced strong opposition to the bill before Parliament, which is seeking to extensively criminalize the activities of Lesbian, Gay, Bisexual, Transgender, Queer, Intersex, LGBTQ+.

The group submitted a memorandum to Parliament seeking that the bill be rejected because it was largely unconstitutional and infringed on basic human rights.

Members of Parliament behind the bill, led by Ningo Prampram MP Sam Nartey George, have rubbished the memorandum and asserted that the bill will be passed into law because it has the support of the wider Ghanaian populace.

The Interruptions Of Our Culture & Our Tradition By The West

Admin - February 19, 2021 0
The leadership of the Ghana Private Road Transport Union (GPRTU) is cautioning drivers under its umbrella not to increase transport fares without...
News

Admin - December 13, 2021 0
A ground-breaking ceremony for the construction of the National Aquaculture Centre and Commercial Farm Project has taken place at the Amrahia Dairy...