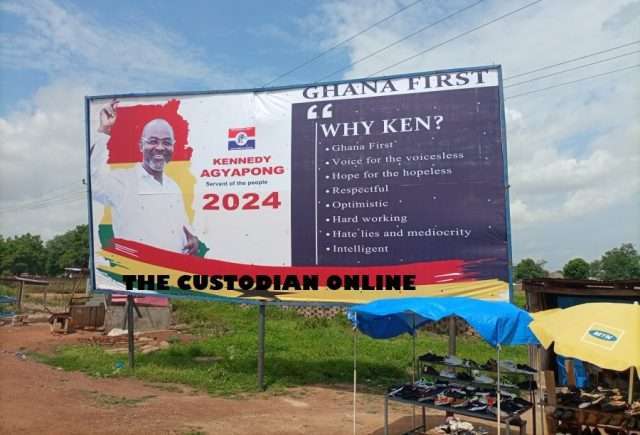 Giant campaign billboards of the New Patriotic Party (NPP) Assin Central Member of Parliament, Hon Kennedy Ohene Agyapong has been raised in multiple parts of the northern region in preparation for the impending NPP 2023 presidential race.

The Chairman of Parliament’s Defense and Interior Committee announced his decision to contest the NPP presidential primaries in May 2022, stating then that, “When the time comes, I am waiting for anybody in the party who will tell me to step down; they will see.”

Several stalwarts of the NPP including Vice President, Dr Mahamudu Bawumia, Minister for Trade and Industry, Alan Kojo Kyerematen, Minister for Food and Agriculture, Dr Owusu Afriyie Akoto and former Ministers for Railways Development and Energy, Joe Ghartey and Boakye Agyarko respectively have been tipped for the showdown to succeed President Nana Akufo-Addo.

THE CUSTODIAN Northern Regional Correspondent, Mohammed Gadafi, reports that one of the giant billboards of the Assin Central lawmaker closer to the junction of the University for Development Studies (UDS) on the Tamale-Kumasi highway welcoming travelers from the south to the northern regional capital, Tamale.

Another billboard has been raised at the heart of the metropolis around the Tamale Jubilee Park attracting the attention of motorists in the town.

Though it is unclear those raising the billboards and fronting for the candidature of the 62-year business mogul and politician, the billboards have inscriptions such as: Kennedy Agyapong, Servant of the people 2024. Why ken? “Ghana first, voice for the voiceless, hope for the hopeless, Respectful, Optimistic, Hardworking, Hate lies and mediocrity, intelligent.

THE CUSTODIAN has learnt that, the campaign materials of the MP have started springing up in parts of the region.

Some residents of Tamale in an interview shared their thoughts about the outspoken Member of Parliament vying to become President of Ghana.

One of the inhabitants said though he is not a member of the governing NPP but he thinks Mr. Agyapong has the chance to win the NPP primaries.