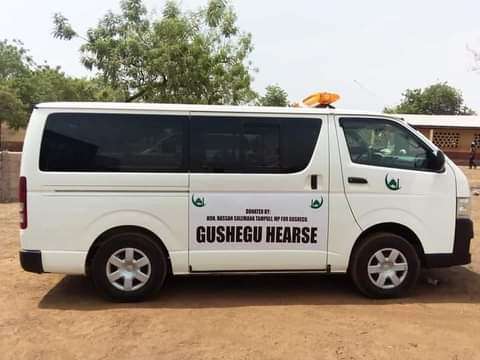 The Member of Parliament for Gushegu constituency in the northern region, Lawyer Alhassan Sulemana Tampuli has presented a brand new Nissan van converted as Hearse to the leadership of the Muslim community in the Gushegu municipality.

The vehicle was handed over to the Paramount Chief of the Gushegu traditional area, Naa Abdulai Mahamadu Shitobu at a short ceremony, Sunday (7 March, 2021) at his palace for onward presentation to leaders of the Muslim community.

The gesture is the personal support of the New Patriotic Party (NPP) lawmaker following an appeal he said was made by the Chief and Muslim leaders in the community through a letter to his office.

The former Chief Executive of the National Petroleum Authority in THE CUSTODIAN news interview indicated in spite of the cost, the purpose of procuring the vehicle was a worthy investment he had to make to mitigate the suffering of his people anytime they’re supposed to transport mortal remains to the graveyard for burial.

“The people use their personal vehicles to carry dead bodies from the mortuary to the cemetery and sometimes from their houses to the cemetery. But, I am not sure if it is safe and healthy for us to be using the same vehicles that we use to be carrying corps, you will never know the kind of sickness you may contract as far as the car is concern”

“So, if we have a dedicated vehicle for that purpose, I believe that vehicle will carry the corps every now and then without the people necessarily seating in the same car” he explained.

The Gushegu legislator maintained the safety of the constituents is key, stating that, “So, I believe without even going into the medical details of what it is that we could be going through by using the vehicle as the corpse is enough for us to use a separate vehicle to deal with our corpse.

Meanwhile, the Gushe-Naa commended the MP for the timely intervention to salvage the situation and promised that the vehicle will be put to good use.

He noted some mechanisms will be instituted including revenue mobilization strategy for the maintenance of the vehicle.

Ghana Gets $69m Grant From ADB Group For COVID-19 Fight

Admin - April 30, 2022 0
The Research and Elections Officer of the New Patriotic Party in the Yendi Constituency, Mr. Abdul Karim Nashiru, who is also a member of...
General News

Mahama’s promise to pay your salaries can’t be fulfilled – Hajia...

Admin - August 5, 2020 0
The Minister of Local Government and Rural Development, Hajia Alima Mahama has called on Assembly Members in the country to disregard promises by former...
General News

Government to continue market disinfection in Ashanti Region on Thursday –...

The CustodianGh Online - March 24, 2020 0
The Ministry of Local Government and Rural Development says it will continue the disinfection exercise in the Ashanti Region on Thursday. This follows Monday’s exercise...