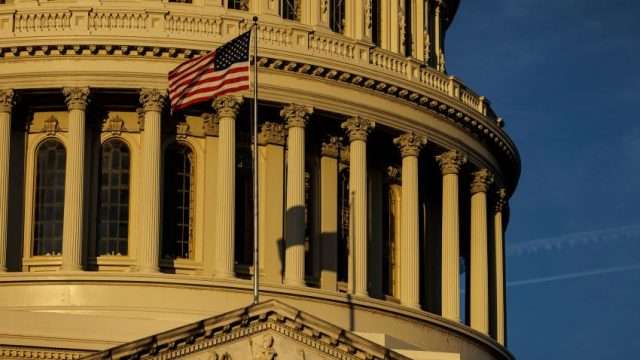 President Joe Biden and the Democratic Party have pulled off a midterm election for the record books.

Democrats have retained the Senate – doing no worse than holding steady at 50 seats and potentially gaining one – and look likely to keep any net losses in the House in the single digits.

The Capitol building is seen through the American flags in Washington DC on October 20, 2022.
Midterms are supposed to be the time for the opposition party to shine. That should especially be the case when there is once-in-a-generation inflation and when the vast majority of Americans think the country is on the wrong track.

Instead, Biden and the Democrats are in a position to have one of the four best midterms for the party controlling the White House in the last century.

So just what happened? It’s pretty clear that general election voters punished Republican candidates they saw as too extreme – on issues such as abortion and/or for being too closely tied to former President Donald Trump.

Still, the election results were extremely unusual. I went back through the record books. Since 1922, there have been three previous instances of the president’s party gaining (or losing no) Senate seats and losing fewer than 10 House seats in the president’s first midterm.

All of them – 1934, 1962 and 2002 – are thought to be monumental achievements for the president’s party and major exceptions to rule, which suggests the party controlling the White House usually loses seats in a midterm.

Attendees cheer during a rally for gubernatorial candidate Wes Moore and the Democratic Party with US President Joe Biden and First Lady Jill Biden on the eve of the US midterm elections, at Bowie State University in Bowie, Maryland, on November 7, 2022.
Democrats’ performance this year has funneled down to the state level as well. We already know, based on projected races, that this will be the first time since 1934 that the president’s party had a net gain of governorships in a president’s first midterm. (1986 is the only other post-1934 midterm, regardless of when it fell in a presidency, when the president’s party had a net gain of governorships, though Ronald Reagan’s GOP had massive losses in the Senate that year.)

The shocking thing about this year (assuming the current trends hold) is that Biden is quite unpopular. His approval rating was 44% in the exit polls. His favorable rating was 41%.

We don’t have any polling from 1934, though considering Franklin Roosevelt won two landslide victories on either end of that midterm, he was likely quite popular.

The polling from 1962 and 2002 shows the presidents at the time (John F. Kennedy and George W. Bush respectively) with approval ratings north of 60%.

Many of those Republicans were endorsed by Trump and had said (at least at one point) that they believed he had won the 2020 election. (This, of course, is false, as Biden won the election.)

The exit polls bear out Republicans’ “candidate problem” in the 2022 midterms. In every Senate race (save Georgia) that Inside Elections had rated as a toss-up or only tilting toward a party before the election, more voters said the Republican candidate’s views were too extreme than said the same for the Democratic candidate.

We see this in gubernatorial elections, as well. Republicans nominated 2020 election deniers for governor in a number of blue or swing states. None of them has been projected a winner, and only Republican Kari Lake of Arizona has any chance of winning.

Perhaps the lack of success by these GOP candidates shouldn’t be a surprise given that some 60% of voters – both in pre-election surveys and the exit polls – believe Biden was legitimately elected.

Still, Democrats look to have scored an incredible achievement in the 2022 midterms, especially given how unpopular polls showed Biden was.

The last two Democratic presidents with approval ratings matching Biden’s in their first midterm (Bill Clinton in 1994 and Barack Obama in 2010) saw their party suffer a net loss of more than 50 House seats, at least five Senate seats and at least five governorships.

Two presidents on the trail

Of course, bad Senate or gubernatorial candidates weren’t the only reason Republicans had a disappointing midterm election.

On the national level, there are two presidents in the spotlight: the current one (Biden) and the former one (Trump). Both men sported negative net favorable ratings, per the exit polls.

Former President Donald Trump speaks to the media during an election night event at Mar-a-Lago on November 8, 2022 in Palm Beach, Florida.
The fact that you have a current president and a former president who are both unpopular isn’t unusual. Both Obama and George W. Bush were unpopular before the 2010 midterm.

What is unusual is that of the 18% who viewed neither Biden nor Trump favorably in the exit polls, 40% of them voted for Democrats. The backlash against one president this year may have been canceled out by the backlash against the other.

In 2010, a September CNN poll had Democrats winning just 21% of those who viewed neither Bush nor Obama favorably.

The reason for the difference between 2010 and 2022 is pretty obvious. I had pointed out before the election that Trump was getting more Google search traffic than Biden (i.e. the former president was in the minds of voters). Bush wasn’t receiving anywhere near the search traffic as Obama in 2010, though.

Arguably, what truly made this midterm unique was abortion. Despite high inflation, only 31% of voters in the exit poll said it was the most important issue to their vote. A nearly identical percentage (27%) said abortion, and these voters overwhelmingly chose Democratic candidates for Congress.

Abortion rights activists demonstrate in support of women’s rights on July 16, 2022, in Santa Monica, California.
This matches the dynamic we saw in the special House elections following the overturning of Roe v. Wade in June. Democrats started doing considerably better than before the Supreme Court ruling.

And while Republicans somewhat recovered their standing in national House polls in the closing weeks of the campaign, they never made it back to where they were during the spring.

The fact that “abortion first” voters overwhelmingly chose Democrats makes sense given that 60% of exit poll respondents said the procedure should be legal in all or most cases.

When you put it all together, Biden and the Democrats appear to have done something others have tried – and failed – in previous midterms: They turned the election into a choice between two parties instead of the usual referendum on the president’s party.

COVID-19 Is Real, You Underestimate Its Dangers At Your Own Peril – Gyasehene Of...