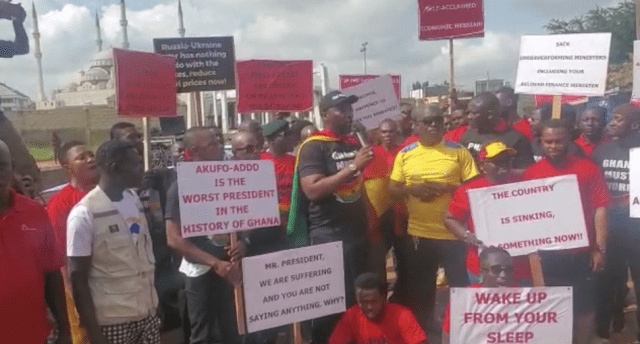 Some Ghanaians joined the “Ghana must work picketing” which started at the Kawukudi Park in Accra on Friday to protest against prevailing difficult economic conditions.

The group led by Deputy National organizer of the National Democratic Congress (NDC), Chief Hamilton Biney presented a petition to the office of the Vice President, detailing amongst other things demands for an improvement in the value of the Ghana cedi.

“All items we use in this country are imported into the country through the ports. Today when you go to the port, the duty changes the following day because of the dollar which is running faster than we expected.”

“We know we have an ‘Economic Wizkid’ who has arrested the cedi before. We do not want to assume that what he told us was for elections. We want to believe that he is who he told us he was. So we are reminding him just in case he is sleeping”, Chief Biney said while addressing the protestors.

Ghana is currently seeking a $3 billion bailout from the International Monetary Fund to revive the ailing economy.

There is general hardship in the country following skyrocketing inflation rates, high prices of fuel amongst others.

What was largely a peaceful protest was marred by some incidents, where the leadership of the “Ghana must work” protestors accused the police of planting an officer disguised as a protestor.

Chief Biney had earlier disclosed he has secured protection from the Greater Accra Police Command.

Ghana’s economy is going through turbulent times as it is plagued with a number of challenges, including rising inflation and the rising cost of fuel.

The country’s currency is also suffering depreciation, while the public debt level has attained an unsustainable level.