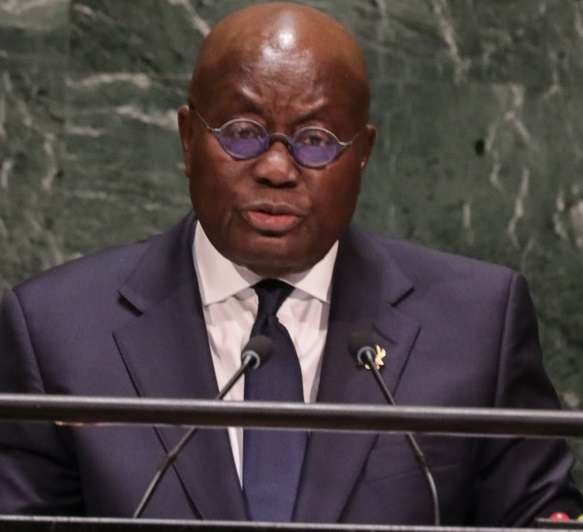 President Nana Addo Dankwa Akufo-Addo has described the rising inflation across the world as the number one global enemy this year.

Inflation, President Akufo-Addo noted, has “hit a 40-year-high in the US and UK in recent months. There is record inflation in the euro zone. Several African countries have inflation rates surging three to four times higher than what they were just two years ago.”

The President pointed out that, in Ghana, “we are experiencing the highest inflation for 21 years. The high costs of food are hurting the poor, especially the urban poor, the most”.

He stated these when he delivered an address to the 77th Session of the United Nations, currently ongoing in New York, in the United States of America.

In economics, inflation is a general increase in the prices of goods and services in an economy.

When the general price level rises, each unit of currency buys fewer goods and services; and therefore corresponds to a reduction in the purchasing power of money.

President Akufo-Addo noted that the spill over from the raising of interest rates by central banks across the world to combat inflation has been severe beyond borders, as global investors pull money out of developing economies to invest in bonds in the developed world.

This, he explained further, has led to depreciating currencies and increased borrowing costs; meaning economies in Africa need to raise and spend more of our own currencies to service foreign debts in US dollars.

“It has become clear, if ever there was any doubt, that the international financial structure is skewed significantly against developing and emerging economies like Ghana.

“The avenues that are opened to powerful nations to enable them take measures that would ease pressures on their economies are closed to small nations”, President Akufo-Addo added.

To make matters worse, the President noted that “credit rating agencies have been quick to downgrade economies in Africa, making it harder to service our debts. The tag of Africa as an investment risk is little more than, in substance, a self-fulfilling prophecy created by the prejudice of the international money market, which denies us access to cheaper borrowing, pushing us deeper into debts.”

According to President Akufo-Addo, history “will judge us harshly if we do not seize the opportunity to make the changes that will enable us deal with the many problems we face”.

President Akufo-Addo has called for an urgent reform of the international financial system, as the current monetary system is skewed against developing countries.

“The financial markets have been set up and operate on rules designed for the benefit of rich and powerful nations, and, during times of crisis, the façade of international co-operation, under which they purport to operate, disappears”, he stressed.

President Akufo-Addo stated “these are the savage lessons that we have had to take in, as the world emerged from the grip of the coronavirus to energy and food price hikes, and a worldwide rise in the cost of living. The necessity for reform of the system is compelling.”

He stressed that “our world is currently not in a good place”.

President Akufo-Addo also recalled an observation by the World Bank, which has described the global economy as “enduring its steepest slowdown since 1970.”

He observed that the world is confronted by a devastating global economic pandemic, pushing Africa into its worst recession for half a century.

President Akufo-Addo added that a slump in productivity and revenues, increased pressures on spending and spiralling public debts confronted the continent without relent.

“As we grappled with these economic challenges, Russia’s invasion of Ukraine burst upon us, aggravating an already difficult situation. It is not just the dismay that we feel at seeing such deliberate devastation of cities and towns in Europe in the year 2022, we are feeling this war directly in our lives in Africa. Every bullet, every bomb, every shell that hits a target in Ukraine, hits our pockets and our economies in Africa,” he said.

Touching on the conflict in the Sahel, President Akufo-Addo noted that the conflict has moved from the Sahel, inexorably, to the West African coastal countries, with all of Ghana’s neighbours suffering terrorist attacks, with some losing territorial space to the invading forces.

“All of us in the Region are being forced to spend huge amounts of money on security. This is money we should be spending on educating and giving skills to our young people; on building much needed roads, bridges, hospitals and other such infrastructure, which we are spending to fight terrorists or to keep them out from destabilising our countries.”

This, according to President Akufo-Addo, is a global problem, deserving the attention of the world community for a global solution.