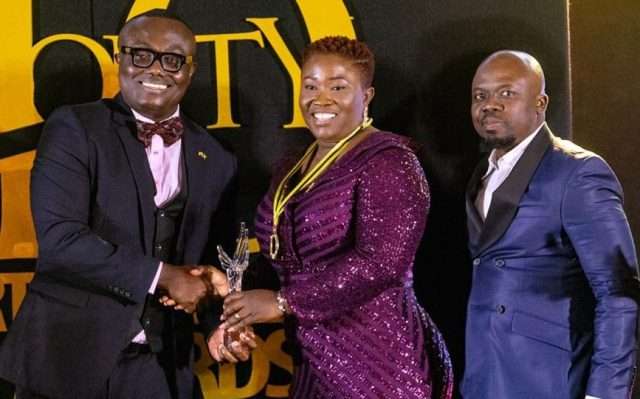 Four industrious young men and women from the camp of the Jospong Group of Companies have been nominated and awarded at the just ended 2022 edition of 40 Under 40 awards held at Kempinski Hotel in Accra, Ghana.

These young hardworking individuals whose nominations were facilitated by Sophia Kudjordzi-Chief Corporate Communications Officer of the Jospong Group were nominated in the categories of Transport & Automobile contested by Adwoa Frimpomaa Nimako Boateng, GM for J. A. PlantPool and S. A. Automobile, Environment and Climate Sustainability contested by Ing. Senam Tengey the GM for Medical Waste Services Ltd., Logistics & Supplies contested by Hannah Boohemaa Otu, Head Procurement and Supply Chain at the Jospong Group Office and Consultancy and Professional Services which was also contested by Mr. Felix Atsrim C.E.O of FEDEMS LTD. a consultant and a business partner to the Jospong Group.

In the various categories contested, Adwoa Frimpomaa Nimako Boateng, GM for J. A. Plantpool and S. A. Automobile emerged the winner for Transport & Automobile followed by Hannah Boohemaa Otu, Head Procurement and Supply Chain at the Jospong Group Office who also won her category, Logistics and Supplies, however Ing. Senam Tengey couldn’t win his category which is Environment and Climate Sustainability
In an appreciation remarks, all awardees dedicated their awards to the hardworking staff and partners whose contributions and corporations propelled them into achieving this feat.

Addressing patrons at the event, Richard Abbey Jnr. Event Director, Xodus Communications Ltd. underscored that the 40 under 40 awards scheme seeks to identify, honour and celebrate a cross-section of the nation’s most influential and accomplished young business leaders under the age Forty from a wide range of industries.

According to the Event Director, putting the spotlight on these young achievers will not only celebrate them but also build a strong platform for them by giving a voice and opportunities to the next generation of industry pacesetters whiles building a positive attitude in our youth to strive for excellence at a tender age.