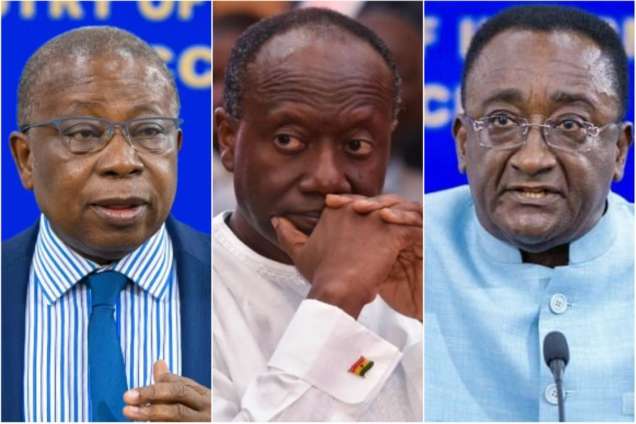 The 1992 Constitution has to be amended to place a limit on the number of ministers and justices of the Supreme Court appointed by the President, the Majority and the Minority leaders in Parliament have advocated.

Speaking at a seminar on constitutional review last Tuesday, the two leaders in Parliament were of the view that the lack of a ceiling for those appointments was unsustainable and a bane to good and efficient governance.

For the Majority Leader, Osei Kyei-Mensah-Bonsu, the country needed not more than 35 ministers, including regional ministers, while the number of justices of the Supreme Court should be limited to 15.

The Minority Leader, Haruna Iddrisu, on the other hand, said ministers, including deputy and regional ministers, should not exceed 65, with the number of Supreme Court justices pegged at 13.

At the event, the former Speaker of Parliament, Prof. Aaron Mike Oquaye, agreed with the Majority and the Minority leaders on the need to cap the number of justices of the Supreme Court, but was of the opinion that the capping must be followed by other amendments to the Constitution.

According to him, putting a limit on the number of justices of the Supreme Court, without amending the constitutional provision on the automatic right of appeal to the apex court, would be counter-productive.

Such a situation, he said, would mean the Supreme Court would be inundated with so many cases without the adequate manpower to adequately deal with those cases.

“Are we going to maintain the constitutional guarantee that people have the automatic right to appeal to the Supreme Court on any court issue?” he asked.

The seminar, organised last Tuesday by the Prof. Mike Oquaye Centre for Constitutional Studies of the Institute of Economic Affairs (IEA), was on the theme: “Reviewing Ghana’s 1992 Constitution: The Perspective of a Legislator.”

Other notable persons who attended the seminar were the Chairperson of the Electoral Commission (EC), Jean Mensa; a Deputy Attorney-General, Alfred Tuah-Yeboah; a Deputy Minister of Information, Fatima Abubakar, and a former Chairman of the Commission on Human Rights and Administrative Justice (CHRAJ), Justice Francis Emile Short.

Making a case to support his stance on the capping of the number of ministers to be appointed, Mr Kyei-Mensah-Bonsu said the Constitution clearly provided for Cabinet ministers who would assist the President in policy formulation, implementation and evaluation.

The Majority Leader further said some ministers appointed by Presidents in the Fourth Republic lacked the competence and “did not add value to governance”.

According to him, some ministerial nominees who had appeared before the Appointments Committee of Parliament for vetting were unable to answer fundamental questions pertaining to their ministries.

Mr Kyei-Mensah-Bonsu said it was a matter of concern for a nominee to a ministerial position to say before the Appointments Committee: ‘Mr Chairman, I do not know but approve my nomination and when I get there, I will learn.’

“How can such people assist the President in the determination of general policies and help in the efficient running of the state?” he queried.

He said the 1992 Constitution made the President so powerful, to the extent that he or she was more or less a monarch with unlimited power.

The President, he said, was vested with the power to appoint ministers, district chief executives, chiefs of the security agencies, commissioners of constitutional bodies, justices of the Supreme Court and boards of statutory bodies, while all public lands and natural resources were also vested in him or her.

“This is a monarch created by the Constitution. The President is so powerful that the rest of us hold him in awe, and if he strays, it is difficult to talk straight to him,” he said.

The Minority Leader said the numerous discussions on constitutional review should give way to actual implementation.