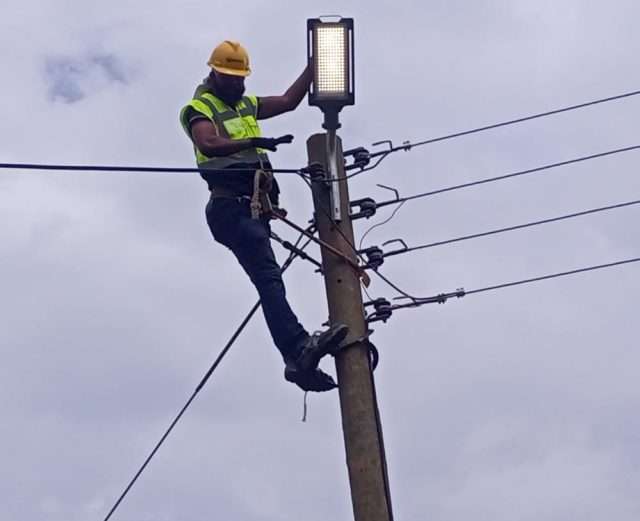 The New Patriotic Party (NPP) Member of Parliament for the Mion Constituency in the Northern Region, Hon Musah Aziz Ayaba has connected six communities in the area to the national grid.

This comes on the back of an earlier six communities the NPP lawmaker commissioned which included; Manyini, Lijoblibu, Wagambo No 1, Wagambo No 2, Nsoja and Tafaldo under the Rural Electrification Project since assuming office as the MP for Mion.

Information gathered by THE CUSTODIAN indicates Mr. Aziz Ayaba as the NPP Parliamentary Aspirant prior to the 2020 general elections lobbied for some villages to be connected to the national electricity grid.

The legislator in his remarks after the commissioning exercise noted socioeconomic activities in the constituency will improve and the people would no longer have to travel to other neighboring communities to grind grains for domestic usage.

The Member of Parliament added there would be a lot of benefits with time and some of the people would start some micro scale businesses such selling assorted mineral water and drinks.

He said, “This electricity will also create jobs for the women and other youth groups here; and very soon maybe a wielder may come on board and one of the youth may decide to go into wielding so that my people wouldn’t need to go to other communities just to fix their metals.”

Mr. Ayaba indicated 30 communities are going to benefit from the Rural Electrification Project under the Ministry of Energy and thus far, 12 areas have been connected to the national grid.

He disclosed prior to his election as MP for the area only 35 out of 127 communities had electricity in the Mion district and gave his commitment and that of the Akufo-Addo led NPP administration to ensure the district gets its share of national development.

This has come to the beneficiary communities as a milestone step to mitigate the poverty levels in the predominantly agrarian district and the region as a whole.

The traditional leader of Warivi, one of the beneficiary villages, Naa Alhassan Bukari stated the people will put the electricity into good use to drive change and development and further commended the lawmaker for fulfilling an age long dream of the community.

He however appealed to the Member of Parliament who doubles as a Member of ECOWAS Parliament to gear his efforts towards education, agriculture and portable drinking water for the people.

Meanwhile, the MP in his response assured the Chiefs and people of Mion that the construction of some water projects will soon commence and completed within a month through the GNPC Foundation.