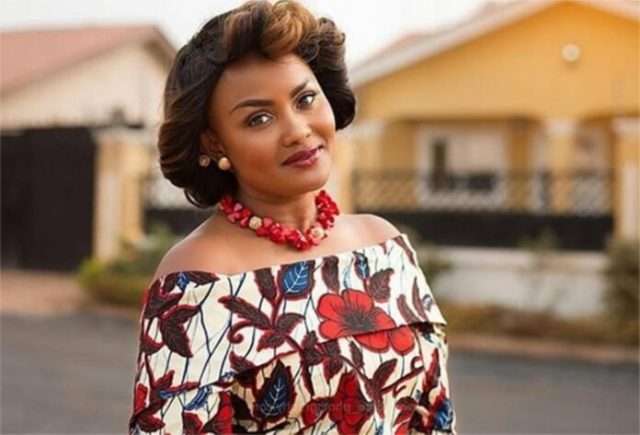 The Circuit court in Accra presided over by Her Worship Evelyn Asamoah has discharged Nana Ama McBrown, who was in court to testify in the case in which Lawrence Asiamah Hanson aka Bulldog is standing trial for threatening the life of the President.

McBrown, who was the first prosecution witness in the case gave evidence and was crossed examined by defense lawyers.

As part of her evidence-in-chief, the video of the incident which happened on the United Showbiz program hosted by McBrown was also played in open court.

The Circuit Court in Accra presided over by Her Honour Evelyn Asamoah last week rejected prayers by the lawyer for Mcbrown to have the Court witness summons set aside.

After the court had dismissed counsel’s application for the witness summons to be set aside, he also prayed for the court not to allow the prosecution to rely on her as a witness, but instead, she will come as a court witness.

He argued that the witness statement filed on behalf of Nana Ama McBrown by the prosecution was procured by deceit without explaining the full facts to her.

It was the submission of counsel that, the information provided to the police which was tendered as a witness statement was not disclosed to the witness what was going to be used for.

Counsel under the instruction of his client prayed for the witness statement to be expunged.

Prosecution led by Chief Inspector Simon Appiorsornu while objecting to the application made by the counsel said they are surprised by the stands of the witness and the submission made by her lawyer.

According to the prosecutor, it was misleading on the part of counsel to say that the witness statement was procured under deceit.

He argued that when the case was reported an initial invitation was extended to Mcbrown for her to assist the police and she reported at the CID Headquarters to volunteer the statement to the Police.

The prosecutor said it was explained to her the purpose of the statement and she willingly agreed to be a witness for the prosecution, which was why the statement was filed.

He said, a witness is a person with a sound mind, and she is also the Host of United Show Buzz that culminated into the issue and therefore she is a competent witness.

The prosecutor said McBrown expresses herself to be understood and also has personal knowledge of the matter before then court.