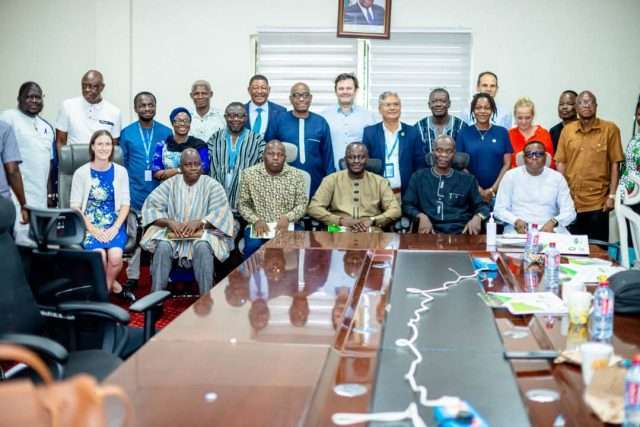 The Northern Development Authority (NDA) has organized a day’s engagement with non-state development partners, Civil Society Organizations and the five Regional Ministers in the north on the emerging Medium-Term Development Strategy for the Northern Ecological Zone.

The five year strategic plan is to promote harmonization, alignment of projects and programs being executed in the north and facilitate collaborative efforts involving the diverse stakeholders for its delivery to improve rapid transformation and job creation.

The Chief Executive Officer of NDA, Mr. Sumaila Abdul-Rahaman in his welcome remarks said the collective agenda is to see to the rapid development of the north to create jobs for the people.

“As we’re all aware, all the poverty indices indicate that the north continues to be the poorest and one of the major reasons why the NDA was created is to help bridge that gap in terms of the deficit that we have in the development landscape” he asserted.

The Chief Executive noted part of the NDA’s mandate is to develop a strategy that would serve as the fulcrum of development of the north, adding, basically our focus will be on coordination, facilitation and trying to enable the various development actors in the NDA zone to deliver collectively so that we can complement each other’s strengths to accelerate the development pace to ensure rapid growth.

“So if we were looking at it in the next 10 to 20 years, we’re looking how we can structure the pace to get the maximum impact. I want to emphasized that, NDA is not looking at implementation but the coordination, facilitation, creating the enabling environment so that development partners, stakeholders would have a central point within the northern sector where they can demand accountability on issues” he added.

Mr. Sumaila Abdul-Rahaman strongly stated as far as the current management of the authority and the government is concern, accountability would be central in everything that they do.

“I want to emphasized that as far the current leadership of the NDA is concern and the government, accountability is going to be at the center of everything and that for everything that we’re going to do, we’re not going to dependent on the existing systems, we would be requiring some other technical assistance, it could be in the form of human resource” he posited.

The representatives of the various Global Development Agencies in their remarks reiterated their respective commitment to collaborate with the NDA to realize the needed development and impact in the areas of peace building and security, education, agriculture, water and sanitation, gender based issues among others.

Mary-Kate Thomson, the British High Commission Northern Ghana Attaché said, “This meeting has been an important opportunity for us to work together on the coordination of development interventions and priorities to deliver impact for the people of northern Ghana.”

She noted the common base and understanding of the challenges is the bedrock of making improvement and supporting the development of the region.

Madam Mary-Kate stated the UK government is particularly committed to work on women development, education, health, addressing issues of exclusion and making sure no one is left behind and also responding flexibly to issues of peace and security.

The North East Regional Minister, Yidana Zakaria, speaking on behalf of his colleague Ministers indicated the steps taken will curtail the duplication of interventions by development agencies whereas other critical areas are lagging behind.

He expressly stated the strategic plan when completed would propel the requisite growth and mitigate the impoverishment of the people.

“So I think that this would be a new paradigm as far as the operations of the NDA are concern. In the past, we looked up to NDA as a development authority relying mainly on the central government support but this time round, we want to get every partner and actors on board and NDA playing a lead role” he explained.