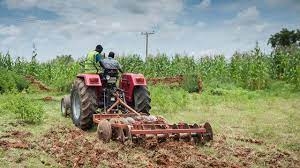 The Mechanized Agricultural Service Providers Association has announced a new price index for this year’s farming activities in the northern region.

The new price will affect both tractor and combine services for both ploughing and harrowing for the 2021 crop season.

The group at their general meeting last week agreed to charge ploughing service at GHS80 for acre and GHS40 for harrowing per acre in the new price lists. However, combine service will go for GHS300 per acre, Chairman of the association; Alhaji Abdul Salam disclosed this to THE CUSTODIAN in an interview.

He said the new adjustment is an increment from last year’s GHS70 for ploughing and GHS35 for harrowing whereas combine service was GHS250. However, he explained the decision to adjust the prices is because of the fuel price increment at the various stations.

He said the average price for a drum of diesel cost GH1, 200 this year compared to an amount of GHS1, 000 last year which is an increment of GHS200.

“We went round the filling stations and realize an average of gallon is 24 cedis and a drum is 50 gallons, meaning when you multiple that, you will get 1, 200 cedis. So at least we should also move forward small in order to break even or make a little profit” he said.

Another reason for the price change according to Alhaji Abdul Salam is the cost of spare parts in the local market. He disclosed a complete overhauling kit cost between GHS1, 900 and GHS2, 000 as at last but has been increased to GHS2, 100 this year.

“So, as service providers if we want to remain in business, certainly and definitely there must be a little price adjustment” he added.

Responding to the impact of COVID-19 on the livelihood of farmers, Alhaji Abdul Salam who is also the Chief Executive Officer for Kurbandi farms said the agreed price was GHS85 but eventually announced GHS80 due to concerns raised by the farmers about economic hardship in the country.

Meanwhile, the group Chairman indicated the existence of the association is aimed at streamlining the operations of mechanized equipment and also ensure the even distribution of the few agricultural machinery in the area and also enforce a controlled price system for all mechanized services across the region.

He said the organization is a registered business entity by individuals who own agricultural mechanized machinery with self-help driven passion and about 100 people have so far joined them across the northern region since its incorporation two years ago.