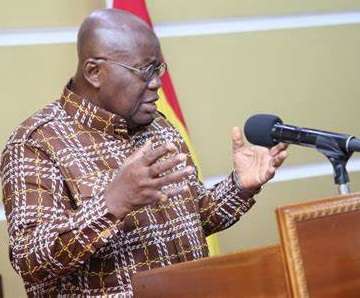 President Nana Addo Dankwa Akufo-Addo has given assurance that his government will not be freezing salary hikes for public sector workers for the next four years.

“Let me reiterate, the salary increment for public sector workers has not been frozen for the next four years”, he stressed.

President Akufo-Addo however appealed to Ghanaian workers to be moderate in their demand for salary increases as the government puts measures in place to recover the economy from the devastating effect of COVID-19 pandemic.

“The truth of the matter is that we are not in normal times and I appeal to all Ghanaians, including organised labour, to assist the government in this endeavour to have rebuild our public finances and economy”, he urged.

President Akufo-Addo gave the assurance at the 11th quadrennial delegates’ congress of the Trades Union Congress (TUC) at Ejisu in the Ashanti Region yesterday.

The 2021 congress was on the theme: ’75 years of TUC: Building a stronger union in a challenging world of work’.

President Akufo-Addo implored Ghanaians workers to support government to rebound the economy for the prosperity of all.

“We need to mobilise additional resources to cater for the new challenges confronting us while meeting other statutory requirements.

“I, therefore, urge all Ghanaian workers, to bear with the government in these unusual and rather challenging times. I’m confident that sooner, rather than later, and together we can create the happy, progressive and prosperous nation we all desire”, he said.

The President added that “COVID-19 resulted in a drastic slowdown in economic activity and a huge drop in domestic revenue combined with the sharp and [unparalleled] hike in COVID-19-related expenditure.

“In sum, this unprecedented crisis, led to a sudden shortfall in government revenues amounting to some GH¢13.6 billion and an unexpected and unavoidable rise in expenditure of some GH¢11.7 billion”.

Last week, the Technical Adviser at the Ministry of Finance, Dr Samuel Nii Noi Ashong, hinted that the government will not be able offer huge salary increases to public sector workers for the next few years due to the COVID-19 pandemic.

Speaking at a forum on the 2021 budget organised by the Ghana National Chamber of Commerce and Industry (GNCCI), Dr Ashong said, “If you look at the budget, COVID-19 is not expected to abate until the end of 2023 and we’re all looking to be tightening our belts for a while and people should not be expecting huge wage increases in the course of the next few years. This is because we don’t have money to pay for it.

“You’ll realise that between wages and compensations for employees and unencumbered domestic revenues, if you net off all the mandated transfers which are required by law, talk of GETFund transfers, National Health Insurance, District Assemblies Common Fund (DACF), the rest which is left is not enough to pay for wages and salaries, goods and service, social intervention programmes, that portion alone is not enough to pay for even wages and salaries”.

Dr Ashong said if the government were to cater to all those demands, it “will be left with 40% in the hole and government would have to go and borrow to pay for that extra 40% plus goods and services and other commitments.

“It is not a rosy picture and let’s call a spade a spade and so when people go on about saying we don’t need the taxes and government must give this and that, the reality is that we don’t have the money”.

This was widely misinterpreted to mean a freeze in salary increases for the next four years.

Government’s total expenditure (including clearance of arrears) is projected at GH¢113,750 million, equivalent to 26.2 per cent of GDP for 2021.

Caretaker Finance Minister Osei Kyei-Mensah-Bonsu presented in the 2021 budget statement to Parliament on Friday, 12 said this “represents a growth of 13.7 per cent above the outturn of GH¢100,052 million recorded in 2020”.

Aspire To Be Entrepreneurs – Afenyo-Markin To Youth

Admin - February 11, 2022 0
Data from the Ghana Statistical Service (GSS) has revealed that rising cost of Housing, Water, Electricity, Gas and other Fuels (28.7%) as well as...
Business

Admin - March 25, 2020 0
The Ministry of Local Government and Rural Development, through the Common Fund Secretariat, has supplied Metropolitan, Municipal and District Assembly (MMDAs) with materials and...
Business

NLA To Partner LONACI Of Ivory Coast To Increase Revenue

Admin - September 20, 2021 0
The Director-General of the National Lottery Authority. Mr. Samuel Awuku will this week make a case for the need for collaborative games among West...
Business

Admin - March 30, 2022 0
The government has decided to reduce the Electronic Transaction Levy (E-Levy) charges from 1.75% to 1.5%. Minister for Finance Mr. Ken Ofori-Atta announced this yesterday...
Business

Ghanaians make up 98% of employees in mining sector – Mining...

Admin - February 23, 2021 0
The Ghana Chamber of Mines says it is committed to creating local employment in the mining sector across the country. Presently over 98% of employees...