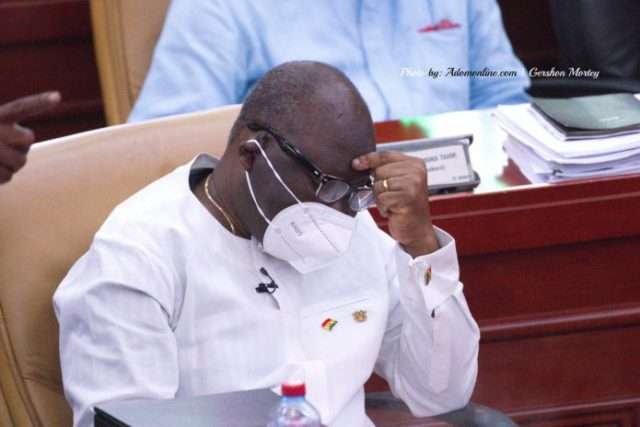 Some New Patriotic Party (NPP) parliamentarians are demanding the sacking of Ken Ofori-Atta as Finance Minister.

The MPs, numbering about 80, held a press conference on Tuesday to impress on the President to relieve his cousin of managing the national purse or risk losing their support for government business going forward.

They also want the Minister of State in charge of Finance at the Office of the President, Chares Adu Boahen, to be subjected to a similar fate.

It was addressed by MP for Asante Akyem North, Andy Appiah-Kubi.

According to him, the call has been communicated to the Presidency through the leadership but to no avail.

“Notice is hereby served that until such persons as aforementioned are made to resign or removed from office, we members of the Majority caucus here in parliament will not participate in any business of government by or for the President [or] by any other minister,” he explained.

The MPs say their sentiments reflect the position of the NPP caucus in the House.

This has been a unanimous call for the opposition legislators who have constantly called for the Minister’s head with some civil society organisations joining the fray at a point.

One of the key cards on the table for these majority MPs is the approval of the 2023 budget which will be pivotal to expenditure, especially at a time when government finances are in limbo

“If our request is not responded to positively, we will not be present for the budget hearing, neither will we participate in the debate,” Mr Appiah-Kubi indicated.

The development comes amid a worsening economic downturn in the country as the Ministry looks to the International Monetary Fund (IMF) for a crucial bailout.

In addition, the Minority has filed a motion of vote of censure against the Finance Minister.

Addressing the media, the Deputy Minority Chief Whip, Ahmed Ibrahim, said the two sides of the house must join forces in removing the Finance Minister from office.

“As representatives of the people and as duty bearers, we must move a motion to call for the end of the Finance Minister.”

The briefing came after a section of the Majority Caucus called for the dismissal of Mr. Ofori-Atta, and the Minister of State at the Finance Ministry, Charles Adu Boahen.

In response, Mr. Ibrahim said, “I see their press briefing as long overdue.”

The pressure on the Finance Minister has come amid an economic crisis that has seen inflation reach 37.2 percent and the cedi tagged as the worst-performing currency in 2022.

Ghana’s forex challenges have seen the Cedi trading to over GH¢14 to a dollar.

In response to previous calls for the removal of the Finance Minister, President Akufo-Addo said he would continue to back Mr. Ofori-Atta.