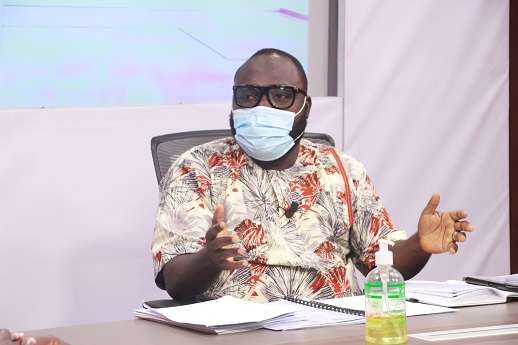 A Deputy General Secretary of the National Democratic Congress (NDC), Peter Boamah Otokunor, has justified the recent suspension and dismissal of some influential members of the party.

The party earlier this week announced the dismissal of its former Central Regional Chairman, Allotey Jacobs and the suspension of its former flagbearer hopeful, Stephen Atubiga.

In an interview on the Point Blank segment on Eyewitness News, Mr. Otokunor said “the party was built on discipline, thus anytime we find ourselves in situations where individuals try to put the name of the party in disrepute and act in an anti-party manner, it is necessary to deal with them as prescribed in the constitution. That is exactly what we have done.”

He noted that the party’s Executive Committee exhausted all options before arriving at the decision.

“In the case of Allotey Jacobs, he was suspended last year, but he did not seem to show any remorse. For three consecutive years, he kept bringing the name of the party into disrepute. There was pressure from the grassroots to take action. We had no choice but to crack the whip on him,” the NDC Deputy General Secretary explained.

He however indicated that the party may consider re-admitting Allotey Jacobs under some conditions.

“There is a procedure for applying to be a member of the party. When he [Allotey Jacobs] re-applies, under the consideration of signing a special bond to be of good behaviour, we may re-admit him. He should be seen to have repented.”

With regard to Atubiga, Otokunor said an action was taken against him for making some disparaging and unfounded claims against key party members including the party’s election 2020 Campaign Chairman, Professor Joshua Alabi.

A letter announcing the suspension also noted that Mr. Atubiga has been referred to the party’s Disciplinary Committee for a hearing.

“It is our hope that you would co-operate with the Disciplinary Committee for an expeditious determination of your case,” the letter sighted by Citi News said.

The party had taken a similar action against its former Deputy General-Secretary, Samuel Koku Anyidoho.

Admin - April 25, 2022 0
Vice President Dr. Mahamudu Bawumia has called on Africans to open their doors to Afro-descendants and connect with the African Diasporans. Speaking at a High...
News

Admin - August 27, 2021 0
Ms Fathia Abdul-Aziz, a Staffer at the Office of the President has commissioned a Mosque at Tolon Gburumani, suburb of the Tolon district in...
General News

Admin - June 16, 2020 0
The United Nations global compact with over 9500 businesses and non-business participants in 135 countries has signed on the Artisans Association of Ghana as...
General News