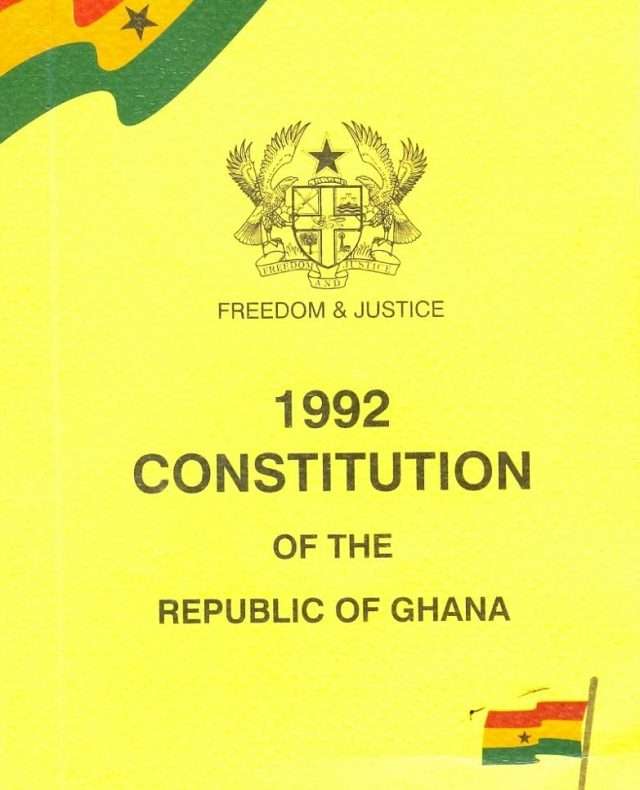 A Constitution is a living document. It is the citadel of our administrative, political, social, economic and legal life. It embodies the basic framework of rules.

The function of the Constitution is to provide the ground rules through which a country or organisation operates.

Our Constitution is the supreme law of the land likewise most countries. It sits on all the laws of the country. Any law which is inconsistent with the Constitution, that law becomes null and void. Article 1 talks about the supremacy of the constitution and Article 2 deals with the enforcement.

The Constitution is the livewire of the nation’s life. It lubricates the legal engine of the country.

It was drafted by the Consultative Assembly which included representatives of Ghanaian groupings including ordinary persons or professionals. The essence was to make it all inclusive and it was also to denounce elitism dominance in the making of our supreme law. Only few professional bodies like the Ghana Bar Association boycotted the process. Very unfortunate.

The Constitution falls under a study called Constitutional law. It is different from other kinds of law like law of contract, law on immovable properties like land, administrative law, law of tort, criminal law, etc in that the other laws of a country obtain their validity and legality from its constitution.

Constitutional law includes much of the law concerning government machinery. It deals with the establishment and structure of the principal organs of the state or government. For instance, our constitution mentions the three main arms of the state, their functions or roles, their composition, tenure of office, leadership, how it is chosen, disappointments etc.

These principal organs of the state are the Executive, Legislature and the Judiciary.

Then we have various rights and freedoms given to the citizens. Chapter five of the Constitution talks about our freedoms and fundamental human rights.

The finance of the country, taxation, the role of Parliament in taxation, contraction of loans both domestic and international.

The Constitution also considers our revered institution, Chieftaincy, in chapter twenty-two. All you need to know about it.

The Executive is in chapter 8 that is the elected leadership of the state. It consists of the President, Vice President, cabinet etc. This arm executes the laws and other polices of the state.

Our legislative arm, ie Parliament, the law making body of the state.

Currently there are 275 seats or elected Members in our Parliament starting from 140 in the commencement of the 4th Republic and the number kept on expanding and now the current number is 275 as mentioned.

Chapter 10 of the Constitution discusses the Parliament.  Judiciary in chapter 11 of our supreme law is another principal organ of the state that interprets our laws. Judiciary has the judges. The courts: both the superior and inferior and other members of the judiciary like bailiffs, interpreters etc. It is headed by the Chief Justice who is nominated by the judicial council, appointed by the President and vetted by the Parliament of the Republic. He performs both the judicial and administrative functions. He sits as a judge and functions as an administrator running the Judicial Service.

There are other laws of the country, that have been catered for in the same Constitution. Article 11 of the Constitution talks about the sources of our law namely:

i. the Constitution itself

ii. enactments made by or under the authority of Parliament established by this Constitution,

iii. any Orders, Rules and Regulations made by any person or authority under a power conferred by this Constitution

There are other laws that are not in the Constitution but exist in line with the constitution.

Sections are used in Acts of Parliament.

Our Constitution is like our holy Quran or holy Bible.

A Constitution can be amended to suit the current situations of the time. An amendment of a constitution includes modifications or changes of the text of the constitution. Our constitution has been amended once since it came into force on 7th January, 1993 by the Constitution of the Republic of Ghana (Amendment)Act, 1996.

The Constitution can be amended by Parliament by passing a bill which is solely enacted to amend it.

We have entrenched and unentrenched provisions in our constitution.

The entrenched provisions in the constitution are those that cannot be amended through the Act of Parliament. Article 290(1) mentions them. Their amendments are done through referendum or referenda (plural). Example the creation of the six regions in 2019.Namely Oti, Savannah, North- East, Western North, Bono and Bono East Regions.

I encourage all to own copies of the Constitution and make conscious efforts to read and ask questions where you find it difficult to comprehend.

Once again, our Constitution is our Holy Quran and Holy Bible. We have to protect, preserve and defend it.

You touch it, you touch our heartbeat.

Remember, our nation is a secular state where the constitution of our country is supreme and we settle our disputes not through war but with our laws where the Constitution is the citadel.

COVID-19 Is Real, You Underestimate Its Dangers At Your Own Peril – Gyasehene Of...