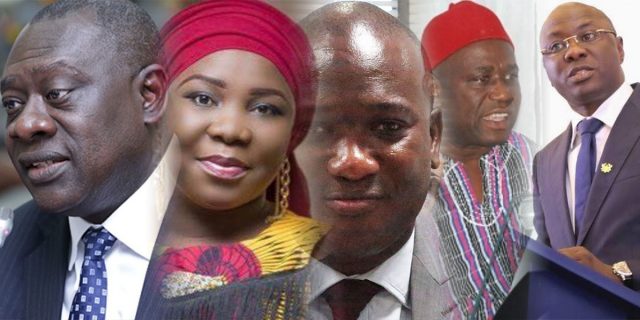 The Appointments Committee of Parliament will commence the vetting of deputy ministers-designate on June 2, 2021, according to information gathered.

President Nana Addo Dankwa Akufo-Addo submitted the list of 39 Deputy Minister nominees and one Minister of State to the speaker of Parliament on April 21, 2021.

Parliament is expected to approve the nominees including 10 women for appointment to serve in 24 portfolios.

The submission of nominees during recess is unprecedented, following approval by the House for the Speaker to refer it to the Chairman of the Appointments Committee consideration and report.

The vetting, which will take a minimum of two weeks will mean the approval and swearing in will be in late June unlike 2017 when nominations were in March and swearing in April.

The nominees are made up of a mixture of old and new including former Chief Executive Officers (CEOs) of state agencies who may have to answer for their stewardship in their former institutions.

In spite of the vetting being of deputy ministers, some controversies may still be generated like what occurred during the vetting of substantive Ministers.

Due to the unprecedented action by a member of the Appointment Committee, Samuel Okudzeto Ablakwa to resign, which, procedure wise, should have been approved by the whole House, the minority side will have to nominate a new person as a replacement.

Mr Ablakwa tendered in his resignation letter to the Speaker of Parliament Alban S. K. Bagbin in March, announcing his decision to step down as a member of the Appointments Committee.

The exact reason for his resignation was not known as he only indicated that the decision was “personal and based on principle”.

Mr Ablakwa added that he took the decision after “careful reflection and thoughtful considerations”, and that he will not be available for the vetting of President Akufo-Addo’s deputy ministerial nominees.

“My resignation is with immediate effect and therefore, I shall not be available for the vetting of nominees for Deputy Ministerial positions,” the letter stated in part.

The nominees include a former deputy Minister of Finance, Mr Charles Adu-Boahen, who has now been elevated to the position of Minister of State at the Ministry of Finance.

A number of the Ministers are also maintaining their portfolios from President Akufo-Addo’s first term.

They include Mr O. B. Amoah and Augustine Collins Ntim at the Ministry of Local Government, Decentralisation and Rural Development; Abena Osei-Asare at the Finance Ministry; Dr Mohammed Amin Adam and William Owuraku Aidoo at the Energy Ministry; and Tina Gifty Mensah at the Health Ministry.

Taxpayers In Ghana To Hit 16 million