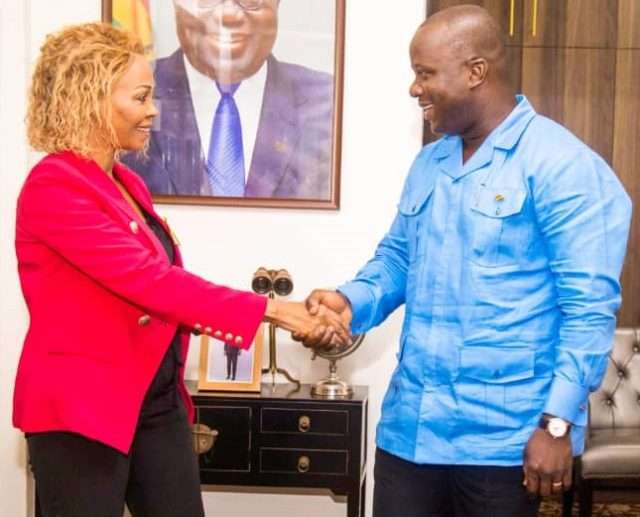 The South African High Commissioner to Ghana, Madam Grace Mason has described Ghana’s small-scale mining architecture as one of the best on the continent.

Accordingly, High Commissioner Masson has announced an official visit to country by a delegation from South Africa’s mining industry from 4th- 9th December, 2022.

She announced this when she led a delegation to pay a courtesy call on the Minister for Lands and Natural Resources, Mr. Samuel A. Jinapor.

Receiving the delegation, Mr. Jinapor who is also the Member of Parliament (MP) for Damongo stated that Ghana is a favourable investment destination where South Africa is a major partner.

He said it was in the interest of both countries to foster mutual beneficial relations.

Mr. Jinapor added that the cordial relations that exist between the President Nana Addo Dankwa Akufo-Addo and his South African counterpart Cyril  Ramaphosa must be maintained and should also propel the two countries to boost trade and investment.

“South Africa is a major partner for our country and they have a lot of investments here, it is in our interest as well that of South African companies are treated well”, he added.

The meeting was also attended by the  South African Deputy High Commissioner Mr. Thando Dalmba; the CEO of Minerals Commission, Mr. Martin Ayisi and the Technical Director, Mines at the Ministry of Lands and Natural Resources, Mr. Peter Awuah.