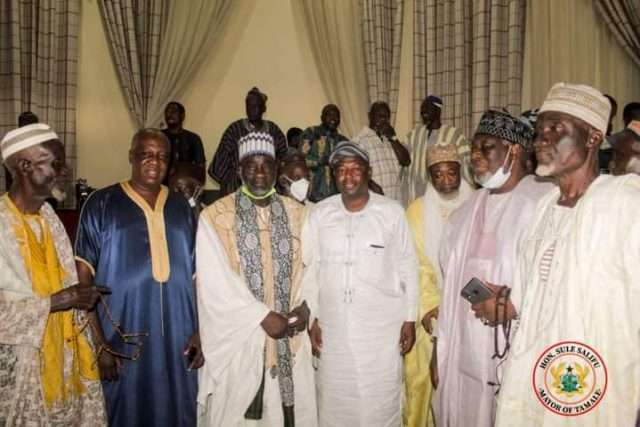 The Metropolitan Chief Executive for Tamale, Mr Sule Salifu has chronicled some key areas he would immediately take steps to address as he assume office today Thursday (7th October, 2021).

The Tamale Mayor and his colleagues Municipal and District Chief Executives in the northern region took the oath of office and oath of secrecy yesterday to official begin work following their successful confirmations.

In a media briefing after holding an Islamic Thanksgiving Service at the Tamale Metropolitan Assembly Thursday morning, the new Mayor said he would first and famous tackle the issue of darkness in the metropolis at night.

He observed several street lights along the principal streets are off making visibility difficult, something he believes is a recipe for criminal activities.

In view of that, Mr Sule Salifu noted this require urgent intervention from the city authorities to brighten the metropolis.

The Mayor noted the Tamale metropolis is also bedeviled with so much indiscipline and lawlessness on the streets, stating that, “I will be engaging with the security agencies to see what plans they would be mapping out to ensure we bring the situation to the barest minimum”.

Mr. Sule added there is so much congestion within the central business district of the northern regional capital and assured his administration in collaboration with the assembly members and the traditional leaders will take steps to address it.

“In fact, let me state that I am not going to do anything in the metropolis without the consultation of the Chiefs, the religious leaders and the assembly members. I will also engage the political parties especially my political party – the New Patriotic Party as well, because it is the party that has brought this government to power and the President appointed me as the Mayor.”

“So enough consultation is going to take place between myself and the major stakeholders, I believe that the Chiefs are very critical in this exercise; the assembly members are also very important because I cannot do this work alone; so collaboration and cooperation is something I will put forward before taking any decision. The fact that I am the Mayor doesn’t mean I will be taking unilateral decisions” he emphasized.

Meanwhile, the Tamale Chief Executive held his first ever meeting today with Heads of the various Departments and the Staff of the Metro Assembly.

He is expected tomorrow Friday (October 8, 2021) to hold his maiden meeting with members of the Metropolitan Security Committee (MESEC) to introduce himself as the new Chairman of the committee.

Budget Chaos ‘Much Ado About Nothing’ – OB Amoah

Hajia Ramatu Mahama has been a personal friend for 40yrs –...

Admin - April 8, 2022 0
The Deputy Minister for Lands and Natural Resources responsible for Mining George Mireku Duker has held a fruitful discussion with the Asantehene,...